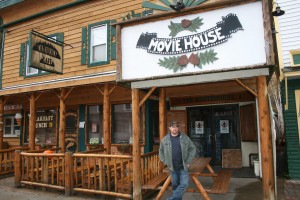 Brandon DiMartino stands in front of the Tamarack Movie House in Inlet, which he co-owns with his wife Megan. Photo by Carol Hansen

The decision to take down the building, formerly known as the Gaiety Theatre, was necessitated by a number of financial factors, according to Brandon DiMartino, who owns the building and the adjacent Tamarack Café with his wife Megan.

High on that list of factors is the film industry’s current transition to digital film formats which would require the couple to swap out their current film and projection equipment at a cost of $50,000 to $70,000—a daunting investment for the movie house which is only open in July and August.

Brandon also cited the estimated cost of $40,000 to replace  the worn and rotting hardwood flooring that has been in place since the mid-1930’s, as another factor. 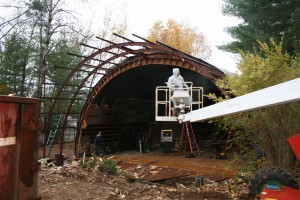 Brandon DiMartino, left, with Stanley Jantzi of Jantzi Construction, which is tearing down the Quonset Hut of the Tamarack Movie House.

The DiMartinos, who have owned the property since 1995, said the theater did well back then, but have seen a gradual decline in business the last few years.

Brandon said the whole structure, with the frame and the sheeting, is 80 percent metal which will be sold off to help offset the expenses for their replacement project—an arcade and miniature golf course which is planned to be in operation from Mother’s Day through Columbus Day. 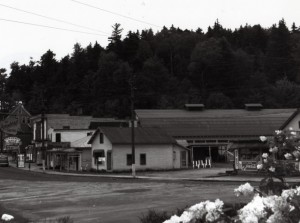 The Gaiety Theater in about 1946

“We’re excited,” Brandon said. “We will be filling a void with something that’s missing in Inlet It’s gotten busier in town and there seems to be more synergy between the businesses. A lot of businesses have raised the bar, which gives people even more reason to stop and walk around.” The building demolition should be completed in two weeks with hopes of beginning the construction of the miniature golf course by next spring. 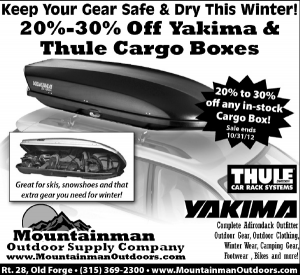