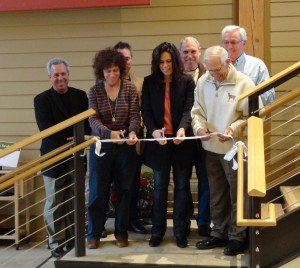 Charles Gaetano (front row, right) and his children-Bill, Brian, Gregory, Chuck, Mary Judith, and Colleen- cut the ribbon to the grand staircase and balcony that is dedicated in memory of Connie Gaetano, who passed away earlier. Courtesy photo.

The Charles A. Gaetano family gathered at View, the arts center in Old Forge, on Saturday, October 13 to dedicate the grand staircase and balcony in memory of their family matriarch Connie Gaetano, who passed away earlier this year.

View Executive Director, Jennifer Potter Hayes, welcomed the Gaetano family and friends to View and gave opening remarks. She thanked the Charles A. Gaetano Construction Company for their patience and commitment to View and the Town of Webb.

She also remarked on the craftsmanship that went into constructing and finishing the building, including the beautiful staircase that graces the lobby and is the centerpiece of the building.

“We are so proud to call this magnificent building home of the arts center in Old Forge,” she said.Potter Hayes then spoke about how the grand staircase and balcony are the centerpieces of View, and of her memories of Connie, as she staffed the front desk at the Gaetano Company’s Utica office.

“It is fitting that the family chose to dedicate the grand staircase and balcony in Connie’s memory as this may have been one of the final public projects that she worked on,” she said.

Kerry Rogers, View board member and chair of the construction committee, spoke of the unconventional path to completion of the building, noting the need to halt construction for a period in order to raise more funds.

Rogers said that it was his sincere pleasure to have worked with the Gaetano team. He thanked them for their professionalism and dedication to the project.

Following the remarks, Charles Gaetano and his six children gathered on the landing to cut the ribbon to the staircase and balcony, and to unveil the dedication plaque.

The plaque reads, “Grand Staircase. Given by the Charles A. Gaetano Construction Corporation in loving memory of Connie Gaetano.” 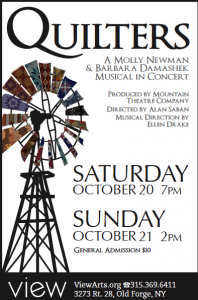