The Young at Heart senior group enjoyed a luncheon in the Senior Room of the Inlet Town Hall on Tuesday, October 9, compliments of Ozzie’s in Old Forge.

Arrangements for the luncheon were arranged between Young at Heart board member Letty Haynes and Kirsty Sutherland, Ozzie’s owner, earlier in the summer.

“Because Edie and Ted Schreppel, members of our group, are such good customers of Ozzie’s, Kirsty called me and said she would like to do something special for the seniors,” Letty said.

The two ladies settled on a menu and a per person price, then set the date for after Columbus Day when it wasn’t as busy at the restaurant.

Then tragedy struck, and Kirsty lost her life on September 14 in a motorcycle accident. “It was a horrible thing—such a loss for the community,” Letty said.Due to the tragedy, Letty put the luncheon out of her mind. But then she got a call from Ozzie’s manager Thera Levi, confirming that the luncheon was to go on as planned.

“Thera said Kirsty was really looking forward to hosting the senior luncheon, and it would go on. And not only that, she said to give the money back to the seniors— the meal would be on Ozzie’s. The gesture was so typical of Kirsty,” Letty said.

Forty-five people enjoyed the luncheon that day. As a payback for Kirsty’s thoughtfulness, donations were collected and the group made a $500 donation to the Alexandra Sutherland College Fund, established in the name of Kirsty and her husband Eric’s daughter, Alex. 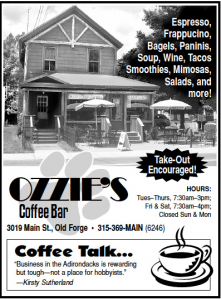