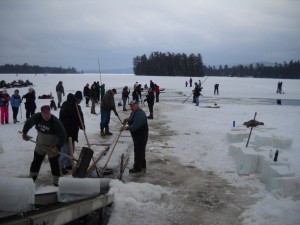 Jim Dillon (who happens to be one of the nicest guys you are ever going to meet) annually throws a dart at his “pin up” oil truck calendar and whatever Saturday in February it lands closest to becomes the day of the Annual Ice Harvest in Raquette Lake.

Generally, the date of the harvest is determined by the amount of ice and the availability and proper running order of the equipment used. (Sometimes the Adirondack Museum has it on display and/or the rubber bands, bungee cords and duct tape have to be replaced.) 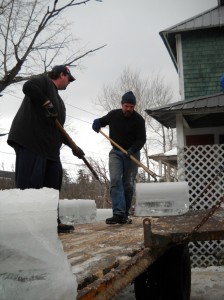 Another factor is the availability of the 4th, and now 5th, generations of Dillons who along with their strappingly young and strong friends make the road trip to be enslaved for a day or two by Uncle Jim.

This year someone with the foresight of an eagle, started plowing the ice job area shortly after freeze over which kept it free of this season’s huge (note the sarcasm) snow accumulations.

This is a precise measurement so as not to strain the conveyor belts or the assortment of aged workers.

The stars seemed to be lining up as the Adirondack Museum had no dibs on the ice harvesting equipment, or on Jim or any of his brothers for that matter. 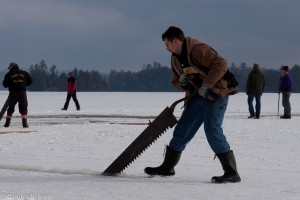 Photo by Carolyn BelknapAs if that wasn’t enough, Jim had received a 100 pack of assorted colors and sizes of bungee cords, and several rolls of duct tape (in night-glow colors, too) as a holiday gift.

Jim then approached Sandy and Don Hicks to see if the free range chicken market is doing well this season.

After all, the Tap Room provides a chicken and biscuit lunch, warm beverage of choice, and a sweet treat for the volunteers to fog down on during the four-minute lunch break allowed by Jim.

The process of prepping the lunch involves a few days of cooking their brains out, plucking breast meat off bones, and making enough gravy to pave Main Street.

Stir, and serve with smiles to approximately 75 people. God bless you, Saint Andrea.

The Dillon women—sisters, sisters–in-law, daughters, and daughters-in-law (and a few others with no blood connection) are at the Dillon homestead plotting, planning and preparing the most delicious ham dinner, complete with all the trimmings—even raisin gravy for us dinosaurs.

This is merrily served up to ice workers at day’s end until they push from the table with groans of contentment and a fullness that overrules the exhaustion from the day of outdoor winter work.

Calls and notification go out to the people that will attend the harvest.

Locals from Old Forge, Eagle Bay, Big Moose, Inlet, Blue Mountain Lake, Indian Lake, Long Lake as well as summer residents and guests (who, to us, look odd in their winter garb) answer the call year after year without fail.

Kevin and Beeba Norris headed-up the snowball and insult throwing, while two generations of the boat-access Gregorys are pushing and scraping on the channel.

Steve Lang is on or in the truck with family in tow, as well as Bennie and Kathy Beauchamp, Tom Smedley, and that good looking Jack Regan, Lou and a one-armed (due to a non- cooperating rotator cup) Ben Burke, Guyla Kiss, Mike Kert, Mike Grossman, Lynne Ballou, Claudia and Bob Brewster, Jim and Ann Rigby, Steve Murdock and Matt Crimm, and a slew of short term (less than the day) workers.

Also, first-year Ranger Gary Miller along with Dakota and Taylor. (Sorry if I forgot a few names.)

Kris Burke mans one of the two loading trucks to be used for transporting ice from shore to storage.

Aunt Nora babysits the conveyor belt to ensure the equipment is not strained.

She calls for repairs and thus there is a chain of events that could make you cry.

Such delays in past years has led to finishing the harvest in the dark—using every available flashlight, headlamp and spotlight in town—or worse, finishing the next day.

The day broke at a searingly warm 20 something degrees minus a blizzard or 25 mph winds. YEAH!

Jim struts the grounds with his large bullwhip orchestrating, harassing and cajoling the volunteers, inspiring everyone to push ice, stay warm, drink plenty of liquids, not to fall in the channel with more than a boot, and to keep smiles on their rosy red faces.

Jim’s brothers Tim and John distribute their ever-famous Dillon dry humor to everyone present, as the next generation of good-looking Dillons look in and outside the ice house—manhandling the blocks in a blur of constant motion.

The temperature drops during the day and the conveyor belt freezes a couple times before the last block rolls by.

Volunteers manage to keep warm and dry and stay until the completion of a tradition that remains much like Raquette Lake—hanging in there.

As you can see by the pictures, no unattended children were viewed near the open waters.

However, there were many curious onlookers and snowmobilers taking in the event, and of course, there was no shortage of willing workers.

Before dark, the job was complete. The workers even stayed to merrily help with clean-up, which was most likely due to the fact Jim had tied a ball and chain to thei ankles of a few of them, and then disappeared with the keys.

The ice is used—thanks to Jim’s ingenious mind—to keep Pam cool and comfortable in the Raquette Lake Supply office, The Tap Room as chillin’ as it can be, and maintains Ed the Butcher’s beautiful produce display during the summer months.

Jim Dillon. He truly is one in a million and I am proud to consider him one of my lifelong friends. Just don’t tell him I said so.