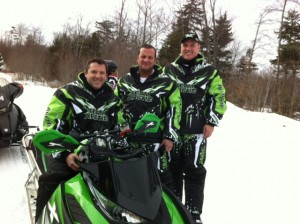 On Thursday, Tony Stewart, Greg Zipadelli and Matt Yocum took a trial run on area snowmobile trails to warm up for this weekend's Crusade for Kids, an annual charity event hosted by Zipadelli at Inlet's Ole Barn restaurant. Curtesy photo

The 6th Annual Zippy’s Crusade for Kids charity event is scheduled to take place at The Ole Barn Restaurant in Inlet on Friday and Saturday, January 27th and 28th.

Zippy’s Crusade for Kids is a not-for-profit founded by Greg and Nan Zipadelli that utilizes community based events to help raise funding for organizations and families in need.

The 2011 event helped to raise substantial funds for Shiners Hospitals for Children, the National Transplant Assistance Fund, Motor Racing Outreach, and the Children’s Homes of Iredell County, among others.

All proceeds from the 2012 event will go directly to helping children through the various organizations. 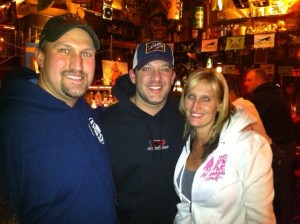 This year’s event will kick off  on Friday at The Ole Barn with sign-in and registration at 5 p.m.

Between 5:30 and 7 p.m., attendees will enjoy cocktails, heavy hors d’oeuvres, raffles, and live music, which will be followed by the celebrity introductions and presentations of title sponsors, presenting sponsors, and crusaders.

At 7:30 p.m., there will be an autograph and meet and greet period, followed by a musical performance by Show Time at 9 p.m.

Arctic Cat Inc. will return as the main ride sponsor and will be providing snowmobiles for the celebrities to ride throughout the weekend, as well as supplying prizes for the raffles and give-aways.

Additionally, Drop Zone TV will be on hand again this year to bring hunting fans into the mix.

As they film again for a show, lucky fans from the hunting community will have the chance to make a guest appearance on the show.