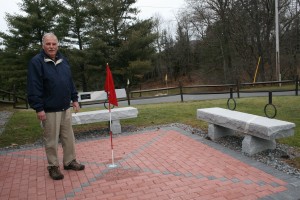 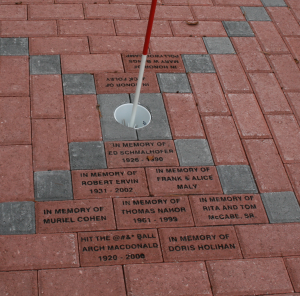 Barker expanded on the idea by prompting the addition of the Golfers’ Memorial.

For the cost of a round of golf, an architect drew up the sketches for the Memorial, which replicates a putting green—complete with a cup in the middle and a red flag, Barker said.

On opposite sides of the Memorial are two granite benches, one of which has already been purchased by the family of Howard Slater. The inscription on the bench plaque reads, “Caddy, Member and President.”

Barker said the hopes of the board are that sales of the pavers will not only cover the cost of the construction of the Memorial and inscription fees, but will also support the addition of a bronze cast caddy on the Memorial site, and other aesthetic enhancements to the course, such as flowers.

The project seems to be off to a good start, according to Barker, with 17 Memorial pavers already purchased since they were made available late in the fall.

The pavers are 4” by 8” each and are $75. Messages can include up to three lines with 14 characters per line.