It’s been a historic week for the Old Forge Boys Varsity Soccer squad and, while the results weren’t thoroughly positive, hindsight will undoubtedly prove that there’s little to complain about.

It’s kind of like the old joke that starts out with a doctor telling his patient that he’s got some good news and some bad news, then asking which one he should deliver first.

Invariably, the answer is, “Gimme’ the good news.” Of course, the bad news always negates the good, leading to a hearty chuckle for all.

Well, Sectional games are no laughing matter and, in this case, the “bummer” part isn’t really so horrible, while the uplifting part is truly over the top.

So, let’s get the not-so-much-fun element out of the way, and save the best for last. 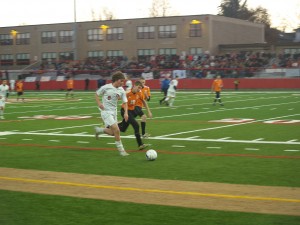 Trevor Godemann outpaces a Ram to the ball.

On Tuesday, November 8, the guys boarded a bus headed for Sauquoit to take on the mighty Hamilton Emerald Knights for the Section III Class D Championship.

That’s the same team that had defeated Old Forge twice during the regular season, by scores of 3-0 and 3-1.

They’re also a team that has been State-ranked all season.

Old Forge, whose fans showed up in ful force, re-takes the field as champions to the roar of the crowd.

Despite all of that, the Eskimos showed no fear and, with some exceptional goalkeeping by Trevor Rice, walked off the field at halftime having earned a scoreless tie against their powerhouse opponents.

Four minutes into the second half, however, Hamilton’s Sam Owens struck paydirt for his thirteenth goal of the season.

Unfazed, Old Forge kept battling. And, twenty-three minutes later, it appeared as if there would be a huge reward for their gutsy play.

Garrett Pavlus, who has become known for the amazing depth and accuracy of his throw-ins, sent a perfect ball toward the net. Seconds after the toss, it was resting in goal, with the game apparently knotted up.

Unfortunately, after some deliberation by the referees, it was determined that no Eskimo had contacted the ball and the score was disallowed.

No argument here, or from Old Forge’s coach, Louie Ehrensbeck, who said, “No one touched it. It was the right call.”

Only moments had passed before the Scarlett Knights’ Charlie Jerome salted the game away for Hamilton.

Some will wonder what might have been had Old Forge’s leading scorer, Kevin Kress, been at full strength. Injuries to Sam Waterbury and Ethan Kress were impactful as well.

Every team has to deal with such circumstances, though, and, in the end, there is little doubt that Hamilton had earned the right to move on after the thrilling 2-0 barn-burner.

But wait. Didn’t we say that there was something that would overshadow that difficult defeat?

You see, due to the large number of schools in our Class, it was decided that there would be two groups assigned for Sectionals; D1 and D2.

And Old Forge, being one of, if not the smallest of those, found itself in the D2 grouping.

Having sent Madison and Brookfield packing, the Eskimos had the privilege of being the home team in a championship game played on Saturday, November 5 at Lowville’s gorgeous sports complex.

And who do you suppose they would have to add to their list of victim’s if they were to take the D-2 crown home?

Yup. None other than über-rival Remsen.

Remember, it was the Rams who upset the Eskimos late in the season in a game which eliminated Old Forge from any chance of taking the division title.

Talk about an opportunity for payback!

Apparently, the athletes weren’t the only ones who were thirsting for revenge, as the crowd in the stands was decidedly pro-Eskimo.

Despite what felt like a home-field advantage, the local boys weren’t able to get things going for what seemed an eternity. They did manage to outshoot Remsen 7-4 in the first half, but found themselves down 1-0 on the scoreboard at intermission.

About five or six minutes had passed in the second half when I happened to pass Coach Ehrensbeck on the sideline.

Undeterred, he commented, “One thing… when we do score, we score in bunches.”

I’m not sure if this was wishful thinking on his part or just pure, blind chance, but did it ever turn out to be prophetic!

Mere seconds later, on one of those aforementioned mind-boggling Pavlus throw-ins, Old Forge took a lead they would never surrender.

That toss by Pavlus, in fact, literally landed so close to the goal-mouth that nothing short of a free-for-all immediately ensued, with nobody being quite sure which Eskimo was the last to touch the ball before it settled into the net. Goal… Pavlus!

Less than two minutes later, Connor Rockhill set up Austin Down’s insurance goal, and the rout was on.

By the final horn, Down had scored again on a pass from West Tickner and Kevin Kress drove a laser past an entirely unprepared Ram team off a direct kick, making the final score 4-1.

Sheer bedlam followed, with Eskimos high-fiving, falling to the ground in disbelief, and, of course, the obligatory Gatorade shower administered to Coach Ehrensbeck.

As the celebration subsided, I had but one question for the leader of the newly crowned Section III, Class D-2 champions, the team’s first since 2003.

“Coach,” I asked, “is it everything you expected it to be?”

In his usual understated way, Ehrensbeck smiled and said, “More, Chuck. Much more.”

And for he, his squad, and the entire community, that’s no joke.