Clogging the blade while carving out special Halloween memory 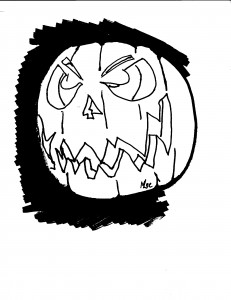 It was the last Saturday in October of 1978 and my sister Erin and I were carving pumpkins on the kitchen table.

Erin went at her pumpkin with both hands, carefully separating the seeds from the stringy guts.

I, on the other hand, was more interested in using my Swiss army knife to make a perfect scary face.

The 12-function knife was a birthday present and upon receiving it I imagined a million uses for it.

It included a razor, saw, spoon and fork and I invited every opportunity to pull it out of my pocket and tackle a task.

I used it to eat my cereal a few mornings, and I tried to cut down a few trees with it too.

I even used it to pull some nails out of an old board to use as a paddle for a raft my friend Eddie and I had built.

But using it to carve this Halloween pumpkin was my greatest challenge to date.

With a ball point pen I carefully sketched out a scary face on its surface.

Then, using the many blades within the knife’s chambers, I began carving away at the orange flesh.

Halfway through the process the knife became caked with pumpkin guts and it was too slippery to grasp.

I took it to the sink and cleaned it off with a couple good shots of water before I went back to work.

I used the spoon attachment to clean the inside of the pumpkin but found that it took me a whole lot longer than if I had used one of the larger spoons my mother had left out for us.

My cutting skills were not as well honed as my drawing ability and I was a little disappointed that my finished work of art didn’t exactly resemble my original conceptualization.

My mother gave us each a candle to put inside our pumpkins.

She lit them for us and flipped out the kitchen lights so we could admire them in their full glory.

In the end, I felt pretty good about my creation.

But what really made my heart glow was having the opportunity to use every tool in my coveted Swiss army knife, growing up Adirondack.