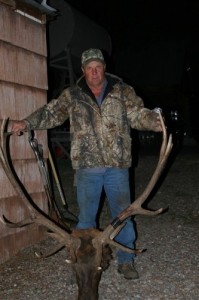 Dave and his big elk rack

Here I sit in beautiful Carbondale, Colorado. After three days of Elk hunting there is no meat in the freezer yet. The weather has been great.

Though the temperatures have been in the 60’s during the day it’s been cold enough at night to put ice on the beaver ponds in Cattle Creek.

Once again we are staying at Bob and Betsy Schenck’s cozy cabin overlooking snow-covered Sopris Mountain. Their home cooking is the best and enjoyed before and after a long day of hunting.

My hunting companions, Art Gallo of Boonville and his son-in-law Bob Bernesby of Long Island, and myself have covered several miles in both Cattle Creek and the Fender Ranch.

We’ve all seen game but have not taken any shots yet.

The first morning in Fenders I went on watch at daybreak. I just got to the spot and saw spikes from a bull Elk sticking over the sage meadow.

I ducked down and could still see the entire animal.

A cow elk stepped in front of the bull and walked right up to within fifty feet of me before it saw me. I had my gun up with the safety off as I have a cow tag.

Then a calf came up next to the cow. I put the safety back on because our policy is not to shoot a cow with a calf. Calves may not make it through the winter without a mom.

The cow and calf ran off down the mountain and the spike bull stood there watching me a few more seconds before running off too.

Spike bulls aren’t legal to take. A bull must have brow tines to be legal. So far we have seen well over 100 Mule Deer and several beautiful bucks.

About 9 o’clock Thursday morning, Bobby Cerise, who has cattle in Cattle Creek, came up to tell us that he had gone up to corral a few more cows before we hunted and saw 200 Elk in the pasture there.

He said there were five shooter bulls and commented that it was unfortunate that Elk season wasn’t open because he saw a few of them also.

They must have moved on before we got there because we haven’t seen any sign of them yet.

Before the season, we went up to clear the road up the mountain at Fenders and on the way there I saw the biggest Mule Deer buck I’ve ever seen.

Unfortunately I had left my camera back at camp, so the only picture I have is stored in my memory bank. There were two other bucks there too, but not as big as him.

The night before the season opened we drove up the road to glass part of the Fenders’ Ranch with binoculars. We didn’t see any Elk that night.

It’s the first time that has happened in all the years I’ve come out here. We saw several Mule Deer but no Elk.

On the way back for supper we saw a beautiful Mule Deer buck in a field with about ten does nearby.

This one wasn’t as big as the one the day before but it was a beautiful buck.

It was getting pretty dark out so I had to crank my camera down to get the shots. They came out pretty good.

The first three days of hunting has gone about the same, with plenty of Mule Deer but very few Elk seen.

The Texans who hunt the same properties as we do got a beautiful 7×7 bull Elk the first day.

It was surely one of the biggest elk taken here. It had a 44-inch spread and was 33 inches high—just a super animal.

Dave, the fella who got it, was pretty proud of his take. I got a picture of him and his set of antlers.

They’re predicting snow here for tomorrow so it should be a wild day in the Elk woods. Maybe one of us will get a shot at a nice bull. A cow will do—they taste better anyway.

Stay tuned. There will be more to report from the beautiful Colorado mountains, but that’s another story. See ya.