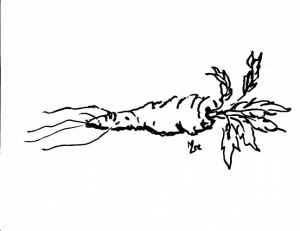 The first one I yanked was cold to the touch.

I wiped off the dirt with my hands and snapped off its wispy tentacles that appeared to be more like hair than plant material.

I wasn’t sure I would even like its taste, so my first bite was quite small.

I found it to have a uniquely crisp and clean flavor with a slight bite.

I soon had two or three more pulled and eaten.

The whole group of us sat on the hillside, talking and eating.

None of us were bothered that our bottoms were dampened by the dewy tall grass.

We were just happily enjoying our find on that perfect fall morning.

Thoughts of our kickball game were completely forgotten when someone discovered that parsnips made great missiles.

Soon we were all pulling and throwing them as fast as we could and The Great Inlet Parsnip War commenced.

A good-sized one hit me square on the side of my head.

The dirt clung to my face as I hurled two or three at the victim closest to me.

The ruckus must have startled our teachers inside the school.

One of them came running out and shouted at us as if we were committing some sort of a crime.

Because we were all covered in dirt, there was no way of hiding our involvement in the incident.

We all lost our recess privileges for a week, which at the time I thought to be well worth it. 