Some veggies and flowers still in bloom—but not for long 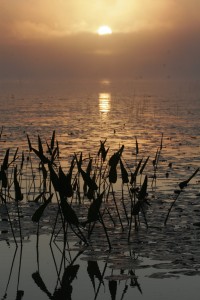 It’s not yet official, but it looks as if The One Square Mile of Hope event broke the Guinness Book record for the largest number of canoes and kayaks on the water in a raft.

I wasn’t one of the participants but I congratulate the hard work of the committee that made it happen for Susan G. Komen for the Cure of breast cancer—a most worthy cause.

I’m sure there will be posters available of the aerial photograph. Thanks to all the committee members and volunteers who made this possible in the little Town of Inlet. We are on the map again.

Our weather has been great but I hope we don’t have to pay for it later in the fall. While driving south last Friday we hit the peak leaves.

They showed changes all the way to Saratoga and even more on the way back home on Sunday.

Though fall is in the air, I’m still picking pole beans and a few tomatoes. My gourds have outdone themselves this year.

They come in so many shapes and sizes that I’m always amazed when I pick them each fall.

I mix them all together in one location and get many different colors and shapes.

Some look like the ones shown on the packs while others are just odd balls—which is the way I feel Gourds should look anyway.

This weather has been great for the Monarch Butterflies. They have gained an extra week to hatch before they get out of here.

Karen and her sister Dawn Bunyan

I’ve see hundreds in the air, even on marginal days. But they have to get out of here no matter what the weather.

A couple of Hummers have also lingered. I’m sure they are juveniles and haven’t figured out that it’s time to go south. If you have a chance, check out these late birds.

They may be strays from the west that didn’t get their bearings and headed east instead of south.

With all the storms that have swept across the country in the last few weeks they may have been pushed along to the east before they got to go south.

I saw my first flock of Red Crossbills by Upper Browns Tract Pond the other day. It was the first of many more to follow.

With all the cones hanging from most of the evergreen trees, these birds will be nesting here during January and February when the Red Spruce cones get ripe to eat.

My feeders have been vacant for the last few weeks as there is so much wild food out there that they don’t need feeders.

Normally I have all kinds of sparrows and finches grabbing some seeds as they travel south.

I had a flock of Common Flickers in the yard the other day digging out the anthills for a snack.

These birds will also eat some berries so they will be fat and happy before they head south.

I also had a flock of Bluebirds feeding up in the big Cherry trees this week so they must have had a good breeding year. It’s so nice to hear their songs all summer long, especially after so many years of uncertainty that they would make it back from the brink.

Karen and I went down to Ballston Spa for my 50th high school class reunion last weekend.

Boy, time passes quickly when you are having fun. It was nice to see and visit with many of my class of 101 from 1961.

Some traveled from as far away as the west coast for the reunion, but I was surprised how many still live in the community.

The class did a variety of things but a majority were school teachers some went on to become college professors.

Most have retired from their jobs. The few who are still working said they are enjoying every minute of it.

Many have two homes, keeping one in the area and one in Florida for the winter months. Such is the good life.

During the reunion the DJ had a contest on 1961 trivia.

Our table, the Old Farts, tied with another table so a name Name that Tune contest was held as a tie-breaker.

We chose our brother-in law, Ray Bunyan, to play for us as he’s always been into music.

The DJ didn’t get two notes out before Ray nailed the answer. What a smile he had on his face when he came back to the table. Same old Ray.

The Fringed Gentians are in full bloom along Route 28 in the field behind the dry hydrant between Inlet and Eagle Bay.

Not all the flowers have come out yet as they bloom on each plant a few at a time.

Some of these will be blooming until snow flies, which believe it or not might not be that far off.

Enjoy the fall weather because it might not last, but that’s another story. See ya.