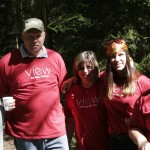 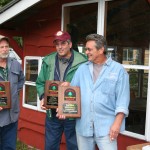 I saw a flock of bluebirds in the fields at the end of Higby Road, also on September 18. And I’ve had several flocks of mixed warblers and vireos working the trees along my driveway in the past couple weeks.

All the wild food hanging on the trees—mountain ash berries, cherries, beechnuts and acorns, along with the big cone crop on most of the evergreens—could be an indicator of a hard winter.

Most of the Deer have darkened up with a winter coat and most of the fawns have lost their spots.

the weekend. With all the leaf cover you would have to just about step on one before you saw it.

They aren’t moving very far from their food source, which seems to be everywhere.

Bears will work a patch of cherries until they are gone, and then move to the next one.

They will do the same with a beech tree or in a corn field in farm country.

The Bear population has expanded to other areas of the state where they eat mostly farm crops and grasses rather then the nuts and berries that are eaten in these parts.

Several Forest Rangers that I worked with in the past have retired this year. I went to a party for three of them last week in Wells.

They were Tom Eakin of Lake Pleasant, John Seifts of Piseco, and Mark Karolvic of Wells.

With their retirement goes a lot of search and rescue, fire, and on the ground experience. To date, Mark is the only one who has been replaced.

The following day we went to the retirement party for Steve Ovitt who lived just outside of North Creek.

southern part of the state into positions in the Adirondacks.

One of those was Gary Miller who just moved to Raquette Lake a week ago.

Gary was the Campsite Caretaker at Nicks Lake for a couple years before becoming a ranger downstate.

Most of the retirees said that every day is like a Saturday to them, which is good.

The 90 Miler Canoe Race went through here on Friday, September 9 without much trouble as the waters remained quite calm.

The temperatures, however were a little on the warm side.

I was handing out water and candy bars with the View Crew at the Eighth Lake Canoe Carry.

The only complaint was those darn biting flies. I call them dog flies because if they get in your boat they bite your ankles. And they were bad that day for sure.

as they headed to the next put-in. Plenty of flies were getting fed that day as the paddlers hands were full.

The next two days of the race were nearly as good as the first and some fast times were recorded.

Many locals do this race each year and seem to have fun doing it.

I talked to several first-time Canoe Classic folks during registration the night before the race.

One party that had done it previously in the two-man racing class picked up two others and were competing in the four-man division.

They figured that four could paddle faster than two, however I don’t think they considered that two others would be riding in that canoe.

The Fringed Gentians are blooming, but that’s another story. See ya.