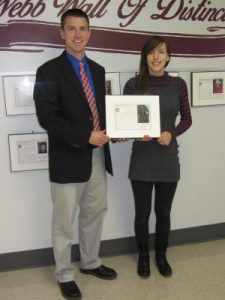 “During the 2015–2016 school year, once, sometimes twice a week, Rebecca would arrive promptly after school to volunteer her services at the library,” Lawrence said.

Ms. Lawrence said Rebecca has assisted in various ongoing projects within the library.

“They were greatly enhanced by her organizational skills,” she added.

“Her dedication and reliability are certainly to be commended,” she said.

Lawrence said that the library is very fortunate to have had met and worked with Rebecca.

“We would also consider it an honor to have her return as a patron, a volunteer or an employee—should the occasion arise,” she concluded.

The Webb Wall of Distinction started in January of 2015, Swick said.

Swick said some students have had some impressive accomplishments and actions that go unnoticed both in and out of school.

Winners are determined by a committee from The Webb Way, Swick said.

Winners have plaques that are displayed in the Main Office hallway with their picture along with a small write up about their achievements.

“Students who are nominated, but do not win, are also notified in a letter sent home congratulating them for being nominated and telling them what they were nominated for,” said Swick.

Town of Webb 2015 graduate, Nicole Redpath painted the artwork on the Wall of Distinction.

Anyone that would like to nominate a student can do so at www.towschool.org