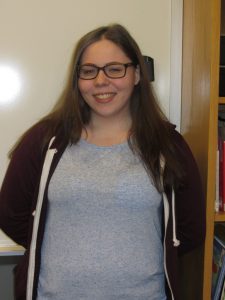 “I want to take two years to figure out what I really want to do for the following two,” she said.

Being an art lover, she said she plans to open her course work with an art emphasis.

“I like developing the creativity that comes with the study of art,” she said.

“There are a lot of jobs where you don’t get to try new things; but with art, its all different,” she said.

Caroline said her favorite classes are Ceramics and Biology.

Miss Harmer is her favorite teacher.

“She teaches in a way that gets students learning new things, not just preparing them for the next test,” she said.

Caroline is a member of Senior Band and Senior Chorus.

She has played the clarinet since the sixth grade, she said.

Caroline participated in the past four years of musical productions that Webb Drama Department has presented.

This year, she had one of the lead roles in “The Pajama Game.”

She is a member of Varsity Club.

Outside of the school, she enjoys hiking and canoeing.

“I really just like to be outdoors,” she said.

She enjoys doing Ceramics at school, but misses the time she had previously spent drawing.

“I’m trying to get back into it in my spare time,” she said.

Unlike the majority of kids her age, Caroline said she enjoys 1940s big band instrumental music.

“There is such a wide variety to choose from, and the instrumental part is so cool,” she said.

Her parents are Anne and Ken DeFilipps, of Old Forge.

Ken works on computers for Faxton St. Luke’s Hospital in Utica, and Anne is a waitress at Walt’s Diner in Old Forge.

In the summer, Caroline said she earns her money working with the local playschool kids.

“I plan on doing that this summer, too,” she said.

Former Town of Webb art teacher, Robert Fountain, has been her biggest influence, she said.

“He went above and beyond to teach us what we had to know about art. He was very passionate about it,” she said.

“We have two cats and a dog that I will miss when I leave,” she said.

She said she likes the manageability that Old Forge provides to those that live here.

“I’m really going to miss living where you know everyone and also that sense of knowing what you’re doing around town,” she said.

Caroline said she is really looking forward to graduation.

“I am ready to go out and try something new,” she said.