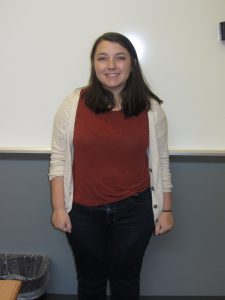 In the fall, Chloe is looking to study Early Childhood Education at Wells College in Aurora, NY.

She is also going to minor in Business, she said.

“I really love working with children—it’s a lot of fun,” she said.

The business minor will satisfy an interest she has and give a back-up plan, she said.

“I enjoy working with clay and I have a passion for art,” she said.

Her favorite teacher is Mr. Cunningham.

Chloe used to play a number of sports, but was sidelined by a soccer-related ACL tear.

She is a member of Senior Chorus and Senior Band.

She has played the clarinet since the fifth grade.

“I’ve been playing the piano since I was in first grade,” she said.

She is also part of the Niccolls Church bell choir.

“I love anything that involves music,” she said.

Chloe said she spends a lot of time reading.

Her favorite music is classic rock, she said.

“When I listen to it, I feel like I travel back to when they were playing it—it’s just really cool to listen to,” she said.

Chloe’s parents are Deb and John Brosemer, of Thendara.

Deb is a pharmacist at Kinney Drugs in Old Forge, and John is employed at Enchanted Forest Water Safari, in Old Forge.

She has one older sister, Allyson, an art student at SUNY Potsdam, and one younger sister, Julie, who also attends Webb school.

Chloe said both her parents have influenced her greatly.

“They have always been really supportive in whatever I wanted to do. I told them that I really liked working with kids, and they suggested that I become a teacher,” she said.

“I’m going to miss them a lot when I leave,” she said.

“I’m really going to miss how close everyone is in this town and all the friendships I’ve made over the years,” she said.

This summer, Chloe said that she plans on being a camp counselor at Adirondack Woodcraft Camps.

She said she is really looking forward to graduation.

“I am very excited to start the next chapter of my life,” she said.