The weather down this way has been very windy and warm and without snow. It looks like the temperatures up north have improved some, and the snow should be gone again.

No big adventures down here, just short trips to the Lighthouse and Ding Darling Wildlife Refuge, looking for birds and other wild things like alligators, snakes and frogs. 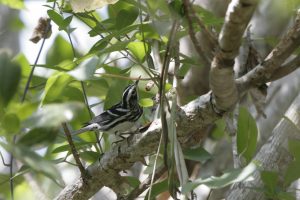 On our way to dinner tonight Karen hollered for me to stop, as there was an iguana crossing the sidewalk.

I quickly turned around, but a biker had already scared it off into the woods. I ended up missing the photo.

We saw one a few years ago as it climbed a tree right beside the bike path. I heard they had all been caught, but I guess they missed one.

Karen’s gopher tortoise came out of his burrow this week and stopped by for a short visit with her.

I got some nice black and white warbler shots one morning. There was also a worm-eating warbler around, but it never posed for me.

Weather-wise across the country, the Rockies were getting hammered with a spring snow of up to four feet.

Between the cold and warmer weather there have been several tornados in the middle of the country.

Houston, TX is under water; this could be the worst flooding ever with over 15 inches of rain.

In other parts of the world there have been some very strong earthquakes.

Southern Japan was hit by one that measured over 7 on the Richter Scale. That was followed by one just below 7 and another over 7…all in a 24-hour period.

Many people were killed and many others buried under fallen structures.

Then in Ecuador a 7.8 quake killed 272 people with many more missing, and aftershocks still occurring.

Down here we’ve had lots of wind from all directions but mostly from the north.

In the two weeks we have been here, there hasn’t been a calm day yet—giving the dolphins lots of waves to play in.

One day, just off the beach, a dolphin was fishing a little off shore. It drew a crowd of about thirty people, some who stood not more than ten feet from the animal.

He was making quick turns, trying to catch fish, but never bumped into anyone.

The people were probably unaware they were moving the fish towards him.

This went on for quite a while, before he moved out over the first sand bar. There have been many more dolphins swimming by, as we sit under our umbrellas on the beach.

There was a feeding frenzy of birds yesterday, just off the beach. The gulls started it, then the terns joined in—all diving in a small area.

Then the big guns—the brown pelicans—showed up and began diving among the smaller birds.

No sooner did those pelicans get off the water, into the wind, than they dove right back in.

The gulls, of course, checked out all their dives to pick up any minnows the pelicans didn’t catch.

Sometimes the gulls actually sat on the pelicans’ heads and checked for bait that may have gotten out of their beaks when they dumped out the water.

There are several ospreys nesting around the island, some of which are just about ready to fledge their young.

There seem to be lots of fish in the sea, as the adults hardly even come out of the water without a fish in their talons.

Some are also picking up materials from the beach to decorate their nests.

All the bald eagles have already fledged their young, but some nights I’ve seen them back near the nest.

Speaking of things in the sky…the Stillwater Fire Tower is being restored and volunteers are needed to help with the project. The contact person is Jim Fox and his e-mail is fsft@frontier.com.

They worked on the tower last fall but lots of painting and repair of stairs and wire fencing up to the tower is needed. This will be done before it’s open to the public.

A dream come true…chasing tarpon with a fly rod this week… but that’s another story. See ya.