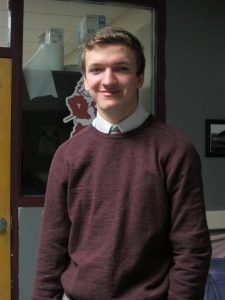 Town of Webb school senior Tyler Fenton, 17, has lived in Old Forge all his life.

Being a sports enthusiast, Tyler is headed to St. Bonaventure this fall to study physical education.

He is also hoping to play basketball and soccer there.

“I have always coached and helped kids in sports—it is something that I really enjoy doing,” he said.

Tyler has played baseball, basketball, soccer, and track and field for Webb.

The team also qualified for sectionals this year, the first time since 2011.

Tyler was a top three for his team in rebounds, steals, points, blocks and assists this season.

He has been and all-star for soccer and track, as well as basketball.

Tyler said his favorite class is English with Mr. Cunningham.

Tyler plays the trumpet in the senior band.

“I took a break from it for a few years, and I just recently got back into it for my senior year,” he said.

He is a member of the senior chorus and he had the lead part in this year’s Drama Department musical production of “The Pajama Game.”

Tyler was also in the department’s musicals “Bye Bye Birdie,” “Annie Get Your Gun,” and had the lead role in “How to Succeed in Business Without Really Trying.”

He is a member of Key Club, Varsity Club and the Yearbook Staff.

He was named the March Kiwanis Student of the Month.

Outside of school, Tyler said he plays sports and studies.

In the summer, he works at The Forge Motel in Old Forge, which is a family owned and operated business.

In past summers, he was also the coach for the Old Forge T-ball team.

Despite the lack of snow this winter, he said he was able to do a lot of skiing.

His favorite kind of music is pop, he said.

Madeline is a second grade teacher at the Town of Webb school, and Billy owns and operates The Forge Motel.

He has one sibling, Nolan, 13, who also attends Webb school.

Tyler’s grandfather, Bob, has been his biggest influence, he said.

“He was very supportive of my coaching and being so into sports. When I said I was interested in going into physical education as a career, he really liked the idea and told me to keep pushing towards that. He wants to see me succeed,” he said.

Tyler said he is going to miss a lot about Old Forge when he goes to college.

“I will especially miss how close-knit the town is, the sporting events, Columbus Day, and participating in the school plays,” he said.

“I am looking forward to graduation, but I’m nervous about going to college,” he said.