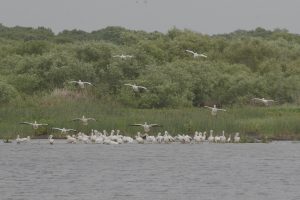 White Pelicans coming in for a landing

From the looks of the weather maps you folks are finally getting snow, even though the winter we never had is supposed to be over. No snow down this way on Sanibel Island, just sand, sun and surf so far.

We’ve had lots of wind—mostly out of the north—which so far has kept the birds to the north and west of us in migration. 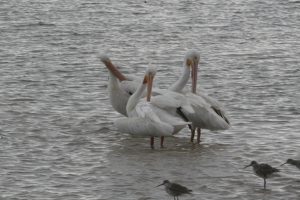 A few new birds showed up today but before that it’s been a single-new-bird-a-day period.

On the way down we stopped in Myakka State Park just east of Sarasota where there were lots of birds and alligators.

A warning was posted about black vultures eating windshield wipers in some of the parking areas, but they didn’t eat ours.

We went to the bird walkway at the far end of the park and watched birds for over two hours.

Right out in front of the viewing platform there were twenty-five white pelicans in a feeding frenzy. They stopped feeding just as others were coming out the boardwalk.

The flock went to the far side of the lake and another fifty white pelicans flew in from the west.

This large group circled a couple times in the thermals and came down for a landing with the ones on water…it was very neat.

While we were on the platform several more people came out to see the birds. One fella had on a Saratoga Race Course t-shirt and I asked if he was from there.

He said no, that he lived in Galway, about ten miles from Saratoga.

Karen and I told him that 50 years ago—before we moved to the Adirondacks—we lived just five miles from there, in West Milton. It’s a small world for sure.

Even though they say traffic slows down on the island after Easter there has been a steady flow of people at the Ding Darling Refuge where I volunteer some days.

While I was working the desk the other day I was asking people where they were from. One party told me they were from Pennsylvania but loved the Adirondacks. They had rented for several years at Covewood Lodge and loved the Inlet-Old Forge area.

Another party had been on some of my boreal bird hikes to Ferd’s Bog.

We have driven through the refuge a few times but only once at low tide when you can usually see more birds.

We only saw two roseate spoonbills and a few white pelicans as most of them have already gone north.

The noseums in the refuge have been a tad feisty early in the morning and at night.

When you get out photographing something these little guys get on your clothes.

When you get back in the car you have them for the rest of the trip, smarting and burning your skin.

Luckily the bites don’t last very long for most people, but they are very uncomfortable for a while.

Some of you may have read about or seen the short video of the panther seen on the boardwalk in Cork Screw Swamp Audubon Sanctuary just south of here.

There is a small population of about two hundred panthers in the Everglades and surrounding area.

Twelve have been killed by cars on the highways…two just last week.

One was reportedly seen in the Bailey Tract on Sanibel Island, but the people said it only had a short tail so it must have been a bobcat.

More from our southern vacation… but that’s another story. See ya.