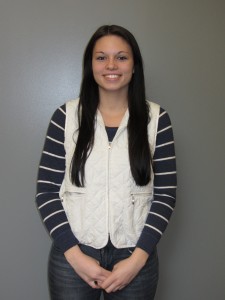 Town of Webb school senior Madison Rice, 18, came to Inlet from the Baldwin-sville area when she was in third grade.

“We moved here for a change,” Madison said.

In the fall, she said she wants to start on an eventual masters degree in Civil Engineering with some business classes and a minor in Architecture.

The University of Tennessee or South Carolina State University are her two top choices, she said.

“I was fiddling around on the computer a couple years ago and since I like working with my hands and drawing, I came across construction, and architectural and civil engineering,” she said.

Unlike many students, Madison said her favorite class is math.

“That’s another reason why I want to go into engineering, because there is a lot of math involved,” she said.

Mr. Huntress is her favorite teacher.

She plays soccer, volleyball, softball and basketball, with soccer being her favorite, she said.

She is a former clarinetist in the school band and a member of senior chorus.

Since seventh grade, she has been a member of Key Club.

“I also go to Key Leader events; this is my third year,” she said.

This involves participation at a leadership camp held in Livonia, through Kiwanis and Webb school.

She was also Webb’s Kiwanis Student of the month this past February.

Outside of school, Madison said she likes to stay active.

“I like to fish, hang out with family, and I work on the weekends,” she said.

She said her hobbies are reading and drawing.

Her favorite music is country. “It has good rhythm with lyrics that actually mean something,” she said.

Her parents are Deborah and Shawn Rice.

Deborah is a caretaker at Limekiln Lake Campgrounds.

She has two older brothers and one older sister—Tyler, Trevor and Mercedes.

Both Tyler and Trevor work for a construction company outside of Syracuse.

This winter, she worked as a cashier at Big Moose Yamaha in Eagle Bay, and she also waitressed at the Muffin Patch, in Old Forge.

Madison said her father has been her biggest influence.

“When I was little, I watched him build our garage and other things around the house. I always loved helping him with his hands-on projects,” she said.

She has two dogs and two cats. “I will miss them, but I plan on bringing my cat with me,” she said.

“I am looking forward to graduation, so I can actually start my life,” she said.

This summer, she plans to earn money working at the Muffin Patch.