Spring weather continues on the east coast while the Rocky Mountains have been getting hammered with snow that has gone right into the midwest.

We get a dusting to an inch some mornings and one morning some icy rain fell which made the roads hazardous for a little while. 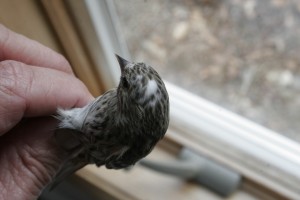 Siskin with white on head

That day was the one I picked to go to Utica, but I got out of the ice and snow about the time I got to Woodgate which made me happy.

The ice has been going out of the lakes one at a time with Fourth, the north end of Raquette, Big Moose and Blue Mountain the only holdouts so far.

My pond is still white but I don’t think I will be walking on it again this year.

This nice weather has pushed several new birds north and when there is a trace of snow they all flock to my feeder.

I put up the net one day this week when there were a lot of birds under the feeders but none going in the potter traps.

When a blue jay or a grackle flies in the little guys flush and go right into the net. I banded over forty birds in an hour-and-a-half.

I picked several black capped chickadees which bit me many times as they are being taken out of the net.

I banded fifteen including a few retraps from previous years…one from 2009.

I also got several pine siskins and a few American goldfinch. I caught four song sparrows that day, one the day before, and two new ones since.

I got a few slate colored juncos…all males determined by wing length.

Then the big boys started going into the potter traps when they saw it was going to snow and  needed a snack.

One time I had three grackles and one red-winged blackbird which all bit and dug into my fingers with their feet.

I had a pair of cowbirds this morning (3/26) but they didn’t want anything to do with the corn in the potter traps.

Activity at the pond had slowed down until tonight. Sixteen turkey vultures showed up but they never got brave enough to get anything to eat. I’m sure they will be back in the morning.

I’ve had two pretty red-tailed hawks coming the past three days and they stay right up until dark. The ravens and eagles have been hit and miss now that the ground is bare and some of the lakes are open.

Both of these species will be on nests in the next couple of weeks in this area, if they are not already.

What a great representation of birds from around the world in one day.

You can keep reporting your birds on e-bird using your same password as you had for GBBC if you want to.

Then on May 14, 2016 there is a Global Big Day which has been going on for years and you can also report that on e-bird.

Many birders report the birds they see daily on e-bird. Rare birds that are out of normal range should be supported with pictures.

I don’t know if you have driven by Fifth Lake but the Common Mergansers have been fishing there for almost two weeks now.

The big black and white males are sometimes mistaken for Loons.

I remember one spring a lady called me from Lake Abanakee and said she had two hundred Loons out in front of her house.

I grabbed my camera and away I went. Well, she had over 150 Common Mergansers.

I showed her pictures in the bird book but she said she had loons and that was that.

A picture of 150 Common Mergansers was still impressive.

Most of the town has gone south… but that’s another story. See ya.