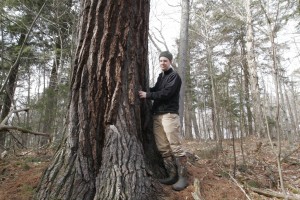 The sap buckets should have been full the last few days as the weather has been more like it should  be this time of the year with freezing nights and just above freezing days.

There has been very little precipitation. There is going to be no snow run off for water in the Fulton Chain unless we get a very wet spring. 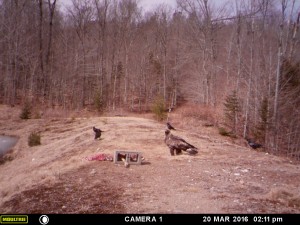 Golden Eagle on the dam

Black River Regulating has kept some water in the Stillwater Reservoir, which is about five feet higher than normal for this time of the year.

When the ice goes out of the other lakes in the Fulton Chain they will probably be catching all the water that falls, so they will be full come Memorial Day.

Spring is officially here and sure signs of it were reported to me by Ellie George last night. 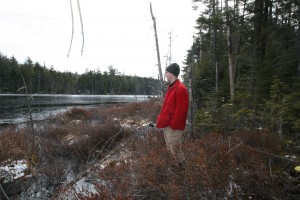 From where she lives in Charlton, down below Saratoga, the peepers were calling and the woodcock were doing courtship flights.

All that was going on while it was snowing very hard.

My daughter Erin and grandson Jake came for a visit this weekend so Jake and I did some prowling around in the woods.

As his grandfather, what else would we be doing?

We traveled to Trout Pond and along the way we identified some of the trees we saw as he is doing that in college.

I found some that stumped him, but that what it was all about. One was the striped maple. He now knows that I use this for beaver bait.

I showed him spruce gum but he didn’t try any. Then we found a big pile of moose poop and that really stumped him.

How many people roaming the woods would even have seen the poop?

We stopped at Cathedral Pines where I had him hug one of the big trees so I could get a picture.

We were looking for beaver in our travels and found some. This colony didn’t put up enough food for this short winter and they were working out to get more.

They had traveled by land to the pond they were in last year to cut some trees.

By this time of year a female beaver will have been bred and will have kits in a month or so.

You see where they go along the shoreline and cut some spruce bows which they take back into the house to make a nest for the kits.

Beaver in this area normally have two to five kits depending on how much food they have in the food pile.

Many times they will have these kits when the pond is still covered with ice.

It’s been fun watching the pond and dam this week as there have been five bald eagles: two adults and three juveniles.

There have also been about twenty ravens…and on Sunday there was a golden eagle which stopped in for snacks for about an hour.

He is on his way to Maine or Canada as they haven’t nested in New York since 1971.

It was a beautiful bird and the ravens didn’t even try to take a snack while he was eating on the carcass.

I guess they know who rules the roost.

When he left late in the day a beautiful red-tailed hawk came in and ate until dark.

During the day a sharp shinned hawk also came by making a pass at the little birds at the feeder.

I don’t know if he got one or not as it’s hard to miss one when there are fifty to a hundred under the feeder at one time.

I have had several reports of bears out and roaming about along with the raccoons, so it’s best to bring the feeders in at night or put up an electric fence as I do.

After being they zapped once  they know when the fence is on. They can hear the fence box ticking so if it’s not on they will get the feeders.

I had several pictures of them roaming by last fall just outside the fence and not trying to get at the feeders.

I had another rusty blackbird at the feeder last week. This one let me get some pictures as he was eating a cornel of corn.

He bit on it several times before getting it down to eating size. The grackles just wolf them down whole.

The rusty blackbird got out of here without a band. I didn’t catch the sharp-shinned hawk that came through either, but I have banded several redwing blackbirds and grackles.

We will have more setbacks with snow and ice before we actually see spring… but that’s another story. See ya.