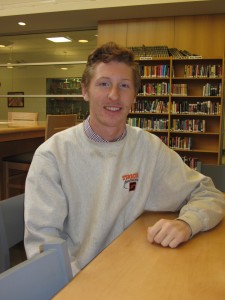 Being a big sports enthusiast, Cy said he is planning on studying Sports Management or Physical Education after graduation in June.

Cy said St. Bonaventure, SUNY Cortland and Ithaca College are his top three choices to attend in the fall.

“I’ve always been into sports,” he said.

“I really like teaching younger kids—I think it would be fun, and I think I would be good at it,” he added.

His winter sport used to be skiing, but this year he joined the basketball team, which took the trophy at the Adirondack Tournament on December, 29th.

The team also qualified for sectionals this year—its first time since 2011.

Cy’s soccer team was also a success this year.

He started out playing soccer at the age of eight on the AYSO team.

His favorite class is Economics with Mr. Kinney.

“He is a fun teacher. Plus, he doesn’t give that much homework,” Cy said.

He used to play trumpet in the ninth grade, but decided it wasn’t for him.

Cy is a member of Varsity and Key Club. He is also on Student Council.

Outside of school, he enjoys a number of activities.

“When I’m not playing sports, I hang out with my friends, sometimes work, snowmobile and occasionally I will go ice fishing with my little brother,” he said.

His favorite music is alternative rock and hip hop.

“I like the beat, and the lyrics,” he said of the urban music genre.

Tim and Laurie Barkauskas are his parents.

Tim owns and operates Taping and Painting, and Laurie is the Events Coordinator for the Central Adirondack Association (CAA).

Cy has two younger brothers and one younger sister—Calvin, Cedric and Chloe, respectively all of whom attend Webb school.

Chloe is also a Webb senior this year.

This summer, Cy plans to work with James Kiefer, owner of Shelter in Old Forge.

“I will be helping with retail and custom, rustic furniture,” he said.

Cy said his dad has influenced him the most.

“He didn’t really tell me what I had to do or didn’t have to do, I kinda just developed it in my own mind,” he said.

The Barkauskas family has two dogs, of which Cy says he will miss one.

“I won’t miss my sister’s dog,” he said laughing.

Cy said that, when he leaves, he will miss the community and how everyone looks out for each other.

“Once you leave Old Forge, no one really cares who you are,” he said.