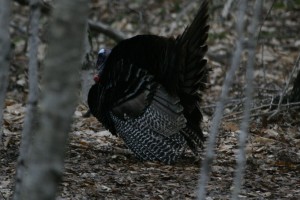 Spring has hit for sure and my daffodils survived being exposed to zero degrees four nights in a row. I still don’t know if it’s going to affect the flower but time will tell as they are about to bloom.

I did have one crocus come out on Saturday (3/12) and with another couple sunny days many more will bloom. 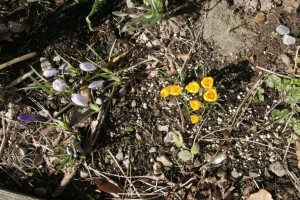 NCPR’s photo of the day today (3/15) was a picture of pussywillows out in Washington County.

Maple syrup producers say they are having one of their best years, but if the trees bud out that will end. It must be close to that in many places.

I’ve seen a few buckets out locally, but I don’t know how they are doing.

You sure don’t need snowshoes to get around this year, but ice cleats were the order of the day to the east of us as roads and trails were a sheet of ice until this weekend.

I took a quick fall in the backyard when I went out to feed the birds last Monday.

An inch of snow covered ice that was caused from water off the roof. My feet went out from under me and I was down in a flash with bird seed flying.

There were a couple of nasty words in the air but no harm done except for my pride.

The little birds came in no time and worked on that seed until the turkeys found it and it was gone.

My turkey flock has grown by a few birds this week and two toms showed up. One was even fluffed up this morning in the ski trail and bred a female. She will be laying eggs in the snow that we are going to get next week.

Speaking of weather… though it’s hard to find on TV with all the political primaries and campaign speeches, the folks down south have sure been getting enough rain.

We’ve had five inches in a day a few times which washed out culverts and bridges.

Just think what would happen if we got 25 inches in two to three days.

That’s what the folks in eastern Texas, Louisiana and Arkansas have gotten with lots of people under water just because it has no more place to go except over the land they live on.

Many of the rivers in those areas aren’t going to crest until about the time you read this.

There were some fishermen ice fishing out on Limekiln Lake on Saturday. I didn’t check on Sunday but it is getting a little hairy to be out on the ice.

When you are sinking in about six inches of slush on top it’s about time to call it a day.

They lost an ice fisherman In Vermont who went through.

A Conservation Officer tried to save him and was rescued by the local rescue squad after he went through trying to save the fishermen.

We don’t need any more excitement around here as there is plenty just on the highways.

My brother told me about a couple rescues over on Mt. Washington.

A couple hikers took some big slides down the mountain side, one of over 900 feet.

With all this nice weather people are out and about, but they have to use some caution as at higher elevations there will still be snow and ice.

The first spring I went into West Canada Lakes in 1966—after working there in the fall—I stood on the ice on the 19th of May. My dad and I had walked in to check out the cabin.

We flew in by seaplane on May 21st and the ice was gone. West Canada Lake is at 2350 feet elevation, the biggest lake at that elevation in the Adir-ondacks.

The geese have been going over in big flocks and some robins have been reported in the area.

The grackles and red-winged blackbirds have been coming to the feeder in big numbers.

I ran out of bands last week but got some more today so they better look out tomorrow.

I had let two red-wings go unbanded but that won’t happen tomorrow.

I still have lots of American goldfinch, pine siskins and purple finch working the seed feeders.

On the carcasses I’ve had five eagles and yesterday and this morning I had an immature red-tailed hawk.

Black River Regulating is catching some of this water… but that’s another story. See ya.