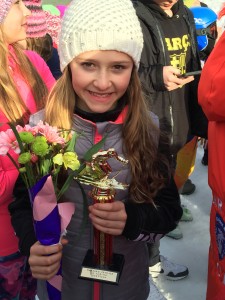 Johanna Lutz raced in the U14 field.

On Friday, the U12 racers were invited to compete in a skills assessment which consisted of being judged on completion of three drills demonstrating various skiing skills.

Karleigh took top honors for the ladies and won a scholarship to any NYSSRA ski camp next year.

“This was a great accomplishment. All of the Polar Bear coaches give her a High 5…well done Karleigh,” said Head Coach Jim Holt.

In Saturday’s race, Karleigh had the best finish of the day with a combined 6th place.

She won a spot on the New York State team and will compete at the Piche Invitational in Gunstock, NH on Saturday, March 12th.

Thomas Levi placed 23rd; Alexis Heath DNF on her first run and due to an ankle injury was not able to compete in her second run.

U14 Johanna Lutz DNF her first run but came back with a solid finish in her second run.

Coach Holt praised the skills of the young skier, who in only her second year of racing, competed as the number two seed for the Adirondack and Central team.