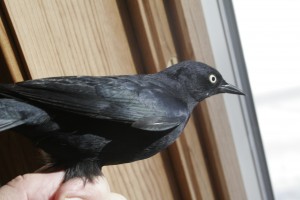 It sure looks like spring has sprung in the Adirondacks. It won’t be long before the blackfly treaters are out and about or they might miss the hatch the streams warm up

Temperatures reached the fifties today (3/8) and it looks like the next two days will be about the same, except with some rain.

I heard the first flock of geese go over yesterday and several flocks go over this morning.

I had more redwing blackbirds at the feeder during this week. Last Thursday I had  a rusty blackbird as I could see its white eye and no wing bars.

I tried to get picture of this bird in the tree branches but it kept moving from feeder to feeder. It went down by the open potter trap a couple of times but seemed spooked by it.

Then, before I could get a photo in the trap it was gone. I did get a chance to get its picture after it was banded.

I’ve had rusty blackbirds at the feeder before, but this is the first one I’ve caught here.

They look like a grackle with a short tail and they don’t get the rusty colors until fall.

It was still around this morning, nearly a week later, so I guess banding him didn’t scare him away.

One cold morning there were well over two hundred birds on the ground and in the feeders at one time.

I didn’t dare put up the net as I would have been picking birds for over an hour if they flushed in that direction.

There have also been five eagles and up to thirty ravens working the carcasses on the dam.

The coyotes have been getting bold and coming out in the daylight, as they have been caught on camera a few times dragging away a beaver or two.

Diane Bowes has had a golden eagle up on Big Moose a couple days that stopped in for some food on its way north.

Golden eagles nest in Maine and Canada but not in New York since 1971.

I have seen a few red crossbills eating grit on the Big Moose Road, South Shore Road and the Limekiln Road, but I don’t know if they are nesting in the area or not.

There are certainly enough seeds on the red spruce to feed them and their young if they wanted to nest.

With a good cone crop the siskins will also nest this time of year.

There was a rare bird alert last week in Florida when a giant white pelican—which is normally seen in Africa—was seen in Ding Darling Refuge on Sanibel Island.

Some friends I bird with when I’m down there got to see it but I didn’t get any pictures.

This bird is much bigger than the white pelicans that come down from the mid-west and stay in the refuge all winter.

SUNY-ESF in Syracuse is looking for big American chestnut trees.

Most of these trees were killed by the chestnut blight that was brought here from China and Japan over 100 years ago.

One large nearly 80-foot tree was recently found up in Maine and now the college is trying to find some in New York state.

The New York Chapter of the American Chestnut Foundation (TCAF) has launched a program where they will reward anyone $50 who finds a chestnut tree over 14 inches DBH (diameter at breast height).

They are also paying $200 for the largest chestnut tree 18-inches DBH or larger found in New York in 2016 not previously recorded.

Right across from where I was brought up there was a large 10-foot-tall stump that my older neighbor told me was a chestnut tree at one time.

It drew my curiosity because it had a bluebird nesting in a hole in this trunk. This was the last bluebird I saw nesting while growing up.

The year I got out of Ranger School, I found several stump sprouts that were still producing nuts. I harvested these and took them over to the Saratoga Tree Nursery.

These nuts grew into trees but they died from the blight.

ESF wants to collect pollen from some of the trees that are still producing, and cross-pollinate these with some of the ESF transgenic trees they have. They hope to produce resistant trees.

I did know of one large live chestnut tree, so I’ll have to check that one out if I can find it.

I sure would be great to get the chestnut tree thriving in our forest again.

More signs of spring are sprouting… but that’s another story. See ya.