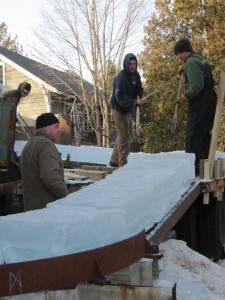 The Raquette Lake Ice Harvest held on Satruday, February 27 was a success despite the above average temperatures and the unusual amount of rain for this time of year.

Jim Dillon, owner of Raquette Lake Supply and the organizer of the event, uses the harvested ice to help keep the coolers cold at his store and in the Tap Room.

This is a tradition that dates back over a hundred years. 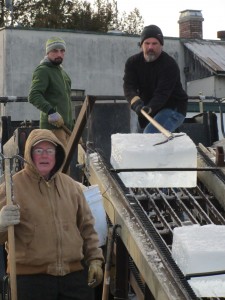 near and far gathered on the ice and formed a long line, pushed the cubes of ice down the channel they cut with a large motor-operated saw.

The ice is pushed up onto a conveyor belt and transported by truck to the ice house located behind the Raquette Lake Supply store.

This year, the ice was reportedly only thirteen inches  thick.

It was also reported since the ice was much thinner than than the average nineteen inches, an extra truck was needed to make things go a little faster. 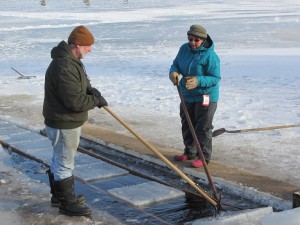 Raquette Lake resident, Nora Burke said that they needed to harvest about thirty percent more ice this year due to the lack of thickness.

She said the harvesting ended about 5:30p.m. that day.

Raquette Lake is one of the last commercial ice cutting operations in the North Country.