Winter came and went again this week and saved some of the events planned for Inlet’s Fire and Lights weekend.

The cardboard sled race was a pushing contest as the sledding hill was too icy to race on.

There were some neat sleds built while others had just a painted cardboard box. 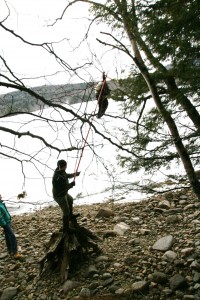 Eagle gets caught up in tree

Those with an upturned front did better in the pushing contest.

There was little snow left on the course after three races as the cardboard sleds plowed it all off. Every contestant got a medal and the winners got a special prize.

King and Queen Greg and Toni Rudd braved the cold wind to pass out the prizes.

Everyone seemed to be making the best of our non-winter weather and having a good time.

Some even braved the sledding hill which was very fast and bumpy.

I don’t know how many contestants were in the Kenny Lyon Sr. Memorial Fishing Derby on the Fulton Chain Saturday, but I saw fishermen all over the ice.

I got one picture of Calvin Barkauskas and Wyatt Becking-ham holding the 4th place laketrout from Wyatt’s proud grandpa, Tom Becking-ham.

He also took a video of them reaching down the hole to grab the fish, tossing it out of the shanty and getting caught by Wyatt, which was neat.

The rains at the beginning of the week made the little creeks and the rivers raging torrents.

East of us there were several ice jams that caused some road closures and flooding.

The Moose River Road was closed for a short time as it was part of the river for a while.

I saw pictures of a big ice jam in Willsboro north of the bridge in town. They had just taken out the dam there last fall which used to jam almost every spring and flood part of the town.

Now it has moved downstream and didn’t back up into homes and businesses.

Just north of there in Keesville the ice is backed right up to the bridge over Route 9 in the center of town.

My little culverts in the driveway were almost frozen closed, but they opened back up with this rain and are flowing again.

Some people I have talked to said they put heat tapes in theirs to keep them open so water could flow through.

Out west, mudslides have been a big problem blocking highways in Idaho and California.

The big fires took away all the vegetation on the hillsides and now the rains are washing the loose soil, rocks and trees down onto the highways.

On a not so happy note, I got a call on Monday from John Hasemeier up on Seventh Lake saying there was a dead bald eagle caught in a tree along the north shore.

The next morning we went up with Conservation Officer KC Kelly to retrieve the bird.

We took a pole saw to cut down the beautiful bird that was caught by the leg band in the crotch of a tree.

This female eagle was banded on Big Wolf Pond north of Tupper Lake by Laura Sommers on 6/10/09 as a 6-week-old nestling.

The other chick in the nest was also banded.

This was a freak accident that this bird got caught by the band and couldn’t get loose. The bird was sent to Delmar to be processed to see if it had other problems before it died.

It is a shame to lose this beautiful bird which was just about to nest for the first time.

Nature is cruel sometimes, and we don’t see the half of it.

Just yesterday while checking traps I found a dead juvenile loon frozen in the ice along shore.

I found it because the coyotes had gone over to the carcass. It is one that got frozen in that we didn’t find.

Spring may have sprung…or at least that’s what the red-wing blackbirds that showed up at my feeder yesterday (2/27) thought.

They arrived a couple days earlier than when they normally show up here.

This morning I had 26 looking for a snack, though it looks like they may still face some winter during March.

Maple syrup collectors are getting a jump on collecting… but that’s another story.