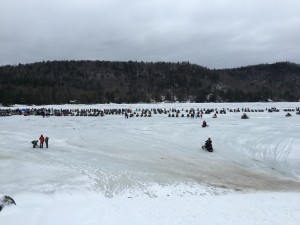 Despite the above average temperatures, the Big Moose Lake Shoot-Out held on Big Moose Lake, on Saturday, February 20 had a pretty good turnout, according to Jim Huss Sr., a spectator of the event.

Since parking was not permitted on the lake this year, due to unsafe ice conditions, cars, trucks and trailers were rerouted to park along Big Moose Road and Glenmore Road.

“They were backed up from Big Moose Road from the firehouse all the way to Martin Road,” Huss said.

The distance between the two is about two and a half miles.

Vehicles also filled up the Glenmore Road, he said.

“There were license plates all over the north east,” Huss said.

The weather was in the low forties and had a few hours of constant rain in the afternoon. 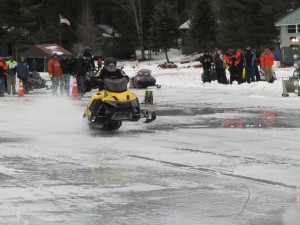 The lake turned very icy as soon as the rain started, Huss said.

The Big Moose Fire Department was on-site with the proper equipment if an emergency occurred, Huss said.

In case you wanted to stay dry and warm, Patrick Duffy, owner of Duffy’s at The Glenmore and one of the Shoot-Out’s organizers set up a live stream that you could watch on YouTube, or right from his establishment.