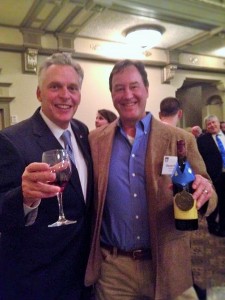 Over 400 wines were entered in the competition which is considered one of the most stringent competitions in the country.

The competition was held in Richmond in January and is only open to Virginia wines made with 100% Virginia grapes.

The Gadino Red wine was the only Nebbiolo to receive a Gold Medal in the competition.

Derek is a 1981 graduate of the Town of Webb School and the son of Jodi Pross of Old Forge.