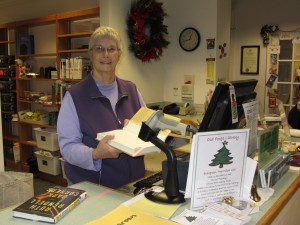 It was a double celebration at the Old Forge Library on Friday, December 18 as the annual Family Christmas Party was held in the newly expanded Children’s Room, which officially opened the same day.

The audience of 75 was greeted by Don Kelly, board president, who thanked the builders, contractors who contributed their time and talents, and all others who helped make the expansion possible.

Following, all in attendance enjoyed Christmas music by Gwen Tracy, a reading of The Night Before Christmas, a movie and refreshments.

And this week, library staff and patrons had another reason to celebrate when longtime staff member Karen Lee, who was injured in an accident at her home in early October, returned to work part-time at the front desk.