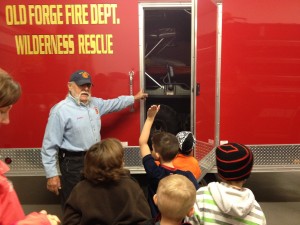 Leo DeVincenzi explains the equipment
in one of the emergency vehicles

The Town of Webb school’s first grade class made its annual trip to the Old Forge firehall on Friday, October 16th.

They learned all about fire safety, what a fireman does, and were brought on a tour of the facility by John Weedmark, Leo DeVincenzi and Peg Masters. 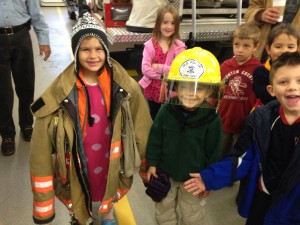 C. Hitchcock and M. Bowsher try on some of the gear

They were taught what it takes to be a firefighter, and the differences between all the department’s emergency vehicles and their equipment, said Webb first-grade teacher Karen Mitchell.

Some students also went into the back of the ambulance, sat in the stretcher and pretended to be emergency victims, she said.

Mitchell said they also were treated to an exploration of the back of the rescue truck.

“Some of the students got to put on [an actual] firefighter’s hat and jacket to see how it feels—very heavy for first graders!” she said.

Mitchell said many students wondered, “What happens if the trucks run out of gas?”

Younger kids have been known to be afraid and hide from the emergency personnel in their fire gear in the time of an emergency.

“Giving the students a hands-on experience with the equipment and firefighters helps to relieve this fear, and will hopefully keep them calm if an emergency should arise,” Mitchell said.

“The kids loved it. They were so interested in all the trucks and rescue equipment that was shown to them. Hands were always raised with questions. They got to see what it was really like to be a firefighter,” she said.