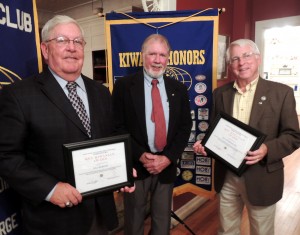 Jane Slack was presented the Kiwanian of the Year Award for 2014–2015 at a Recognition Dinner held Monday, September 28 at Van Aukens Inne.

The award was presented to Slack, treasurer of the organization, by Kiwanis President Michael Griffin, who cited her for providing the talent and financial expertise in managing the finances for One Square Mile of Hope for the past two years. 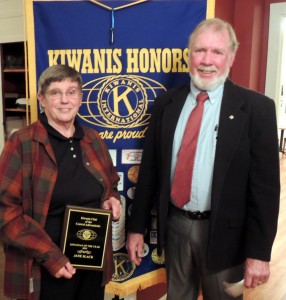 Kiwanian of the Year Jane Slack

One Square Mile of Hope, held on Saturday, September 13, 2014, gathered an estimated 3,150 canoes, guideboats and kayaks to regain the Guinness Book of World Records for largest floating raft.

The effort raised over $185,000 for the Breast Cancer Research Fund.

“The challenge and involvement of participating in the Kiwanis programs and One Square Mile of Hope made all the efforts worthwhile,” Slack said in acceptance of the award.

Other members honored at the event were Bill Ransom, Ray Schoeberlein and Linda Bamberger, who were presented with Key Kiwanian Awards.

Ransom and Schoeberlein were  recognized for their long-time dedication to Kiwanis and especially to the annual Winter Sports Challenge fundraising project.

For many years they have made a major effort to contact the various sponsors with great success, said Griffin.

Bamberger, outgoing secretary, was recognized for her diligent and successful effort in managing the many club records and files during the program year 2014–15.

Also during the event, Dawn Lenci and Phil Petty were inducted as new Kiwanis members.

Anyone interested in joining Central Adirondack Kiwanis may contact Membership Co-Chairs Doc Foley at (315) 794-9460 or Bob Teesdale at 369-5425.

If you are interested in making a financial contribution to the many Kiwanis kid-oriented projects, donations may be sent to Kiwanis Club Foundation of the Central Adirondacks Old Forge, NY, Inc., P.O. Box 1044, Old Forge, NY, 13420.