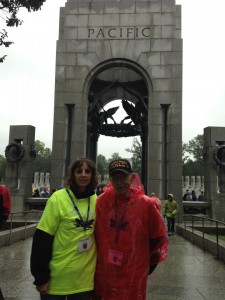 Former Old Forge resident Eugene Pelletier was among the World War II and Korean War veterans who were honored by Honor Flight Syracuse with an all-expense paid plane trip to Washington, DC on Saturday, October 3rd.

Gene was accompanied by his daughter, Patty Duffy, who said 80 veterans made the trip, the oldest being 102.

The veterans and their accompanying guardians visited the WWII, Korean, and Vietnam Memorials, and also went to Arlington National Cemetery and observed the changing of the guard at the tomb of the unknown soldier. 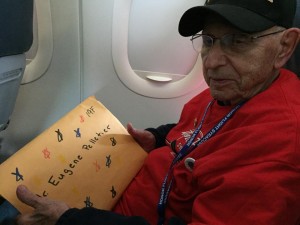 Gene Pelletier receives his Mail Call package on the plane

The group was transported around the Washington area throughout the day by buses and escorted by police.

They were greeted by many supporters as they departed Syracuse Airport as well as at Reagan International Airport upon landing.

When the veterans boarded the plane back to Syracuse at the end of the day they were surprised with a Mail Call package filled with letters, cards and drawings—much like those received during wartime to keep their spirits up.

Honor Flight Syracuse created the Mail Call initiative and got area school children, elected officials and others involved to write notes of thanks to the veterans for their service.

They also encouraged the guardians who went on the trip to contact friends and loved ones to do the same.

Because Gene was a former member of Old Forge American Legion Post #893, Patty got in touch with Commander Bill Ransom hoping to get the word out to members.

Ladies Auxiliary member Judy Ehrensbeck, a teacher at Town of Webb School, took it one step further and brought the idea to English teacher Megan Pfeifer who also got her 6th and 7th grade students involved.

Gene ended up with close to 100 pieces of mail in his package.

Gene was just 17 years old when he enlisted in the Navy, receiving his training in Sampson, NY.

He served as a Radar Striker aboard the USS Rutland from October 1944 to August 1946.

More information about Honor Flight Syracuse can be found at: HonorFlightSyracuse.org.