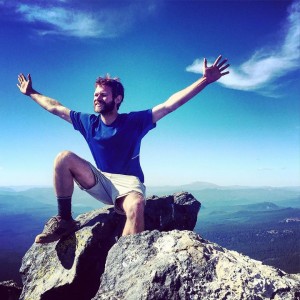 Town of Webb school graduate Tyler Socash (Class of 2005) has made it more than half way on his dream-journey hike of the Pacific Crest Trail.

On September 15th, he had hiked about seventeen hundred miles, averaging roughly twenty-four miles a day.

Tyler has gone through thirty wilderness areas, five national parks, and swam in the three deepest lakes in the United States.

“I’ve hiked through the states of Washington, Oregon, and half of California. That’s pretty cool,” he said.

He said he’s walked into black bears on the trail and been woken up by bald eagles flying over him.

“The only thing I haven’t seen yet is a mountain lion. I’ve seen everything from mountain goats to black bears… spartans, elk, martens and weasels,” he said.

“I am hoping to do the second half in two months also. [The terrain] is more difficult, but I have become acclimatized to the elevation and I’m in the best shape of my life,” he said.

“The craziest day was when I hiked to the top of Mount Thielsen—also known as the lightning rod of the Cascades, because the top is frequently hit by lightning; I could see Crater Lake,” he said.

“That was thirty miles south of where I was. Within twenty-four hours, I had hiked to Crater Lake and jumped in; it was wild.”

Tyler tried to climb Mount Thielsen in the past, but had been unsuccessful without a rope—it includes a forty-foot tree climb.

This time he was successful, however, in climbing the 9,000 feet to the top of the peak.

“It was a great feeling,” he said.

Tyler said he has been ‘cowboy camping’ every night.

“I don’t use a tent, I just sleep under the stars. I have only used a tent about four times so far. It only rained six times in the past two-and-a-half months.

“The worst thing is the mice and ants [crawling on me].”

You might miss that if you’re in a tent,” he said.

“I have a lot of horrible blisters,” he said.

“The water shortage hasn’t been an issue. The fires out here are horrendous, but I’m hiking fast enough to miss them all,” Tyler said.

“I still see a lot of smoke every day.”

“I’m about to go on the two hundred mile, most rugged trail in the United States and it’s hard to predict when I’ll be done. But, I need to go fast because winter is coming. There is already snow on Mount Whitney,” he said.

Tyler plans to take a small break in November to meet his new niece Elouise.

Then he heads to New Zealand for the second part of his year-long journey.

“I want to see my family. I plan to hike Bald Mountain when I am home, too,” he said.

“Every day [of this journey] is the greatest day of my life.”