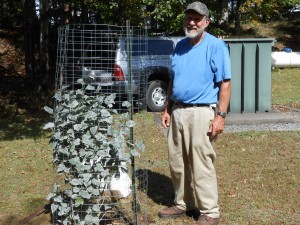 Mary was a charter member of the club which celebrated its 10th anniversary this year.

She was the originator of the tradition of filling bud vases with flowers and presenting them monthly to each of the residents of the 24-room senior facility, an effort that continued following her passing on September 16, 2014.

Pat Tappan, founder and member of the club, said Mary is greatly missed and fondly remembered when members gather for meetings or community projects, such as the annual spring cleanup and planting at Point Park in the center of town.

“We could always rely on Mary to bring the things that we forgot…she took responsibility for so many aspects of the club.

She left a big hole in the Garden Club as well as our community,” she said.

“The residents of Lakeside are grateful to both Mary and the current members of the Garden Club for the beautiful plantings,” said resident Phoebe Greene.