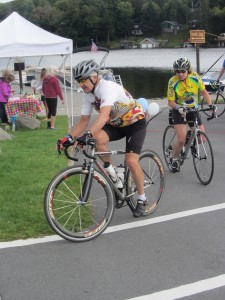 Over 200 cyclists from all over the country spent two days in Old Forge during their seven-day pedalling tour of the Adirondacks, Cycle Adirondacks.

The cyclists and a support crew were headquartered at the George T. Hiltebrant Recreation Center on North Street from Wednesday, August 26 through Friday morning, August 28.

At the pavilion there was live music, a Beer and Wine Garden, food concessions and an opportunity to find out more about the area at the information booth and from local vendors. 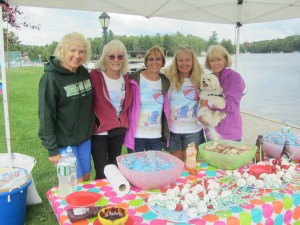 The group’s next stops were Raquette Lake, Blue Mountain Lake and onward to Long Lake where similar activities were planned and where they would spend the night before heading to their final destination: Saranac Lake.

The Wildlife Conservation Society is the host of Cycle Adirondacks, the first fully supported road-bike tour of the Adirondack Park and beyond. The non-competitive tour allows participants to cruise at their own pace and fully appreciate the Adirondack experience.

For further information visit the Cycle Adirondacks website at: cycleadirondacks.com.