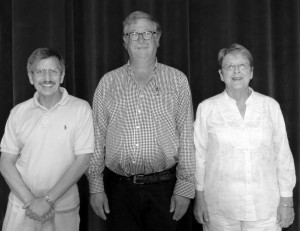 Officers were elected and new directors were named to the VIEW board at the art center’s annual meeting held Monday, August 24th.

Charles Porter was nominated to complete an open term.

Fritz Messere recently retired as founding dean of the School of Communication, Media and the Arts at SUNY Oswego.

He has taught at Oswego, Ithaca College, and Cornell University.

He is currently secretary of Symphonia, the successor to the Syracuse Symphony Orchestra, and serves on the board of CNY Arts.

Mary DuRoss is retired as Marketing Director for the United Way of the Greater Utica Area.

Prior to that, she was Manager of Safety, Records ad Training in Asbestos Removal for Oneida Asbestos Removal Company of Utica. She has served on a number of boards, including House of Good Shepherd in New Hartford and Hospice, as well as a volunteer for the Mentor Mom’s Program of United Cerebral Palsy of Utica and Senior Program for Shut-ins of Waterville, among others.

Robert Bischoff is General Manager of Trenton Technology, Inc., a computer systems manufacturer in Utica where he has been employed for 16 years.

Previously he was an underwriter for The Hartford Insurance Group in Connecticut.

He resides in Utica with his wife, Janet Silver, and enjoys spending time at his camp in Old Forge.

Charles Porter currently serves on the board of directors of Giant Eagle, Inc.

Recently retired from Giant Eagle, he was senior director of entertainment, and prior to that, director of merchandising information responsible for pricing.