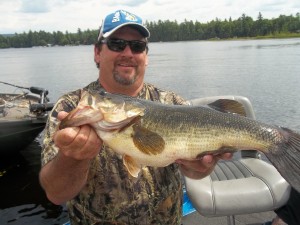 Dan williams with his winning lunker

Forty six boats pre-registered for the Saturday, July 25 annual bass derby held in Raquette Lake. The breakfast buffet was held at the fire hall during registration verification and confirmation of team members. After a short meeting the teams departed from the town dock—after a live wells’ inspection—for eight hours of fishing competition. 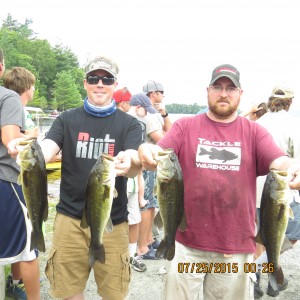 Upon their return Don Hicks was at the scales for weighing, with Bill Clinch to measure lunker winning hopefuls.

Kate, Robin and Deb logged in weights, recorded each teams totals and assigned winners on the team board. Mark Forsell cooked hot dogs for the competitors and the crowd and Liz Forsell did her magic selling 50/50 tickets.

Junior Fish Whisperers returned the fish to the lake after weigh-in and pictures by Donna and families were a done deal.

In third place were Dariek Howard and Zach Swalgin-Teller of Westernville with a weight of 13.91 lbs.; Christian Bench and Ted Bench III of Long Lake secured 2nd place with 14.41 lbs.; and Sean Rice and Jim Baker of Inlet squeezed out a first place just edging the Benchs with a weight of 14.46 lbs.

We would like to thank all the volunteers, who without their help this event would and could not be!

Thanks to Raquette Lake Parks & Recreation, Raquette Lake Fish & Game Club and The Hamilton County Federation of Sportsmen for their support of the event.