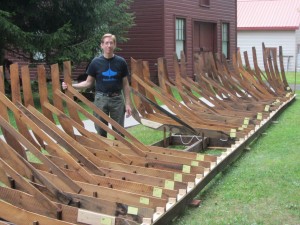 Ron Walker with his finished piece of ‘The Mohawk.’
Photo by Gina Greco

Boat enthusiast, Ron Walker of Woodgate, decided to take on a project that consisted of putting the remaining ribs together of the 20th century boat “The Mohawk,” also called the “Pickle Boat.”

In 1906, David Codling launched the Mohawk, which operated as a floating grocery store to supply fresh milk, baked goods and frozen meat to customers along the Fulton Chain.

In July of 1906, a fire on the boat burned the floor around its gasoline engine.

Codling discarded the engine and decided to convert the boat to a steamer.

In 1907, Codling sold the boat to Charles Wilcox. He ran the boat with Walter Marks until 1942. It was then donated to the “Uncle Sam Victory Scrap” pile.

The ribs of the boat were donated to the Goodsell Museum and have been stored in the attic for many years.

Walker said it took him about two months to build the base of the boat, having estimated  locations for the ribs.

At at cocktail party held at the Goodsell on Thursday, August 6, Walker saw the finished project for the first time.

“Of course some pieces are missing,” he said.

“I wanted to have it completed for display at this year’s [Antique] Boat Show, but I didn’t have it done in time,” Walker said.

He said the sculpture is not much of a project to put together and take down for various events.

Walker said he plans to display it at next summer’s Antique Boat Show in Old Forge.