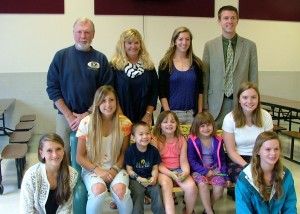 The Kiwanis Club of the Central Adirondacks and members of the Town of Webb School National Honor Society were collaborators in the creation of a Buddy Bench that was recently placed and dedicated at the school’s playground.

In attendance at the dedication were kindergarten through second grade students and NHS members.

The concept of the Buddy Bench, a place to go for peer support when a student is having issues, concerns or problems in their lives, was suggested by Mary Lee Kalil of Inlet.

Bench materials were supplied by Kiwanis and the NHS members painted the bench.

In creating awareness of the importance of being kind and thoughtful of others, a “Fill Your Buckets” program was presented to elementary students earlier this year.

Through the program, students became mindful of their own acts of kindness and the kindnesses bestowed upon them by others, and added each act to their bucket until it was filled.

To reinforce the program, Mrs. Griffin handed out wrist bands and pencils with the message, “I’m a Bucket Filler!”