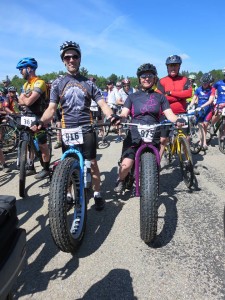 Under sunny skies thousands of spectators and racers cheered at the finish line while the band Showtime entertained.

The food and beer, provided by Inlet Volunteer Emergency Services and Tri-Valley Beverage, flowed freely as a purse of over $9,000 and special prizes were awarded to 125 winners out of the record 800 entrants.

The overall Men’s Champion, Anthony Clark, of Feeding Hills, MA, set a new course record for the Indian Lake-to-Inlet direction with a time of 1:51:50, taking the top spot from BFC repeat champion Alec Donahue who had previously owned the record for both directions. (The race changes direction each year.) Donahue came in second overall with a time of 1:54:03.

The youngest finisher was 10 year-old Sam Wilcox with a time of 3:43:42 and the oldest finishers were 76-year-old Carl Grimm and 82 year-old Joe Butcher III.

Butcher came in after the 5-hour timing cutoff but at 82, the race committee decided he had earned a prize anyway.

With that announcement, the crowd went wild.

The Tandem category was won by longtime BFC veterans Brian and Wendy Sanders with a time of 2:33:58.

Team HRRT brought the most members to the race with 15.

Widely known as The Adirondacks’ Greatest Race and always the second Saturday in June, the Black Fly Challenge is a famous ‘gravel grinder’ that attracts both serious racers and casual riders on cyclocross, mountain bikes, tandems and even unicycles.