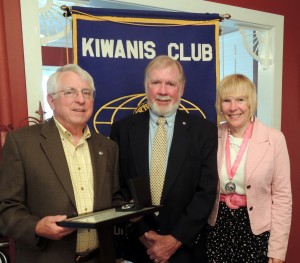 The Walter Zeller award was created by Kiwanis International Foundation to recognize any individual in whose name a donation of $1,250 has been made to the Kiwanis Eliminate Project.

Throughout his years with Kiwanis, Schoeberlein has served as president and has chaired many committees, including the Student of the Month/Year Committee.

In accepting his award, Schoeberlein acknowledged the many community programs of Kiwanis and the commitment of all its members to the children of the Central Adirondack community.

Also during the event, President Mike Griffin recognized past president and past Central Region Governor Carolyn Trimbach who was presented with a Walter Zeller Fellowship at a recent New York District Kiwanis meeting.