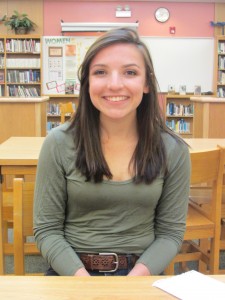 Town of Webb school senior Allyson Brosemer, 18, moved to Old Forge from Utica when she was about four years old.

In the fall, she will be attending State University of New York (SUNY) Potsdam. There, she plans to study Art Education.

“I liked the feel of [Potsdam]. I met a lot of the professors and they all seemed very nice. Everyone was easy to talk to; it was fun,” she said.

Allyson said that, artistically, she is drawn to a wide range of media.

“I am currently in a ceramics class and I enjoy that,” she said.

Her favorite class is physics with Mr. Huntress. “He’s funny,” she added.

Allyson serves as her Class Secretary.

She was named queen of the 2014 Columbus Day parade.

Ms. Gaudin, Mr. Huntress and Mr. Fountain are her favorite teachers, she said.

She is a member of the Webb varsity soccer and softball teams.

She is a nordic skier, too.

Allyson is a member of senior chorus and also participates in the school’s spring musicals.

In her spare time, she enjoys playing the piano.

She hikes and works on becoming a 46er in her spare time.

“I have hiked twenty-nine already. My favorites so far are Big Slide and Whiteface Mountain,” she said.

Allyson’s parents are John and Debbie Brosemer. Debbie is a Pharmacist at Kinney Drugs in Old Forge. John is in charge of maintenance at Camp Gorham in Big Moose.

Allyson’s sisters, Julie and Chloe, both attend the Town of Webb school.

Last summer Allyson worked at Hollister’s Trading Post and as a lifeguard at the Inlet public beach.

She said her parents have been her biggest influences.

“They’re both really hard working, and they give me the drive to succeed and try my best,” she said.

She has two dogs that she said she will miss when she leaves.

“The [spring] play and Columbus Day are my favorite memories [of high school],” she said.

This spring, Allyson attended the Mexico trip through Tapestries of Life, that Principal John Swick brought to the school.

Local students spent a week, helping to build an orphanage.

“I really enjoyed helping,” she said.

“I’m gonna miss how close the community is and knowing everyone.

When I go to college I won’t know anyone, so it’s going to be a big change.”

Still, Allyson said she is looking forward to graduation and a new beginning.