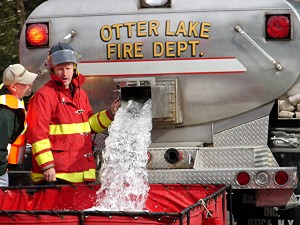 The Otter Lake and Old Forge Fire Depart-ments will open their doors to area residents on Saturday and Sunday, April 25 and 26 so they can learn about what it takes to be a volunteer firefighter in their respective communities as part of the fifth annual Recruit NY state-wide initiative.

Over the last several years, it has been tough for many fire departments throughout New York State to recruit and retain volunteers for a variety of reasons.

Like most volunteer fire departments, area fire departments need to bolster their emergency responder numbers so they can continue to provide the optimum level of protection for their residents.

Throughout the day, the Otter Lake Fire Department will conduct tours of the station and firefighter apparatus, allow visitors to try on firefighter gear, and provide activities and stations throughout the firehouse for visitors.

Fire department personnel will discuss the requirements to be a volunteer, as well as conduct demonstrations, answer questions, and let visitors know how to get involved in the fire department.

The Old Forge Fire Depart-ment will offer similar tours and demonstrations as well as provide information on what it takes to become a volunteer at an Open House on Sunday, April 26 from 11 a.m. to 1 p.m.

Refreshments will be served at both events.

Otter Lake Chief Jeff Abrial said he added three new firefighters to his current crew of 31 active members—all three who are in the midst of receiving EMT certification training.

Three of the recruits, he said, are continuing their education through current enrollment in the Firefighter I course which will certify them as interior firefighters.

Last year, more than 500 fire departments in 55 counties across the state held recruitment open houses. FASNY is hoping for an even higher turnout this year.

“Whether we gain one or ten recruits, we’re just happy to see an interest in helping our respective communities as a volunteer firefighter,” said Chief Bogardus.

“Our current members love what they do—they are everyday heroes who help neighbors in need.

We hope our recruitment day will inspire other area residents to join our fire service family,” said Chief Jeff Abrial.

Anyone interested in learning more about becoming a volunteer but is unable to attend the open houses, can contact Chief Abrial at (315) 534-9340 or Chief Bogardus at 369-5031. More information is available by calling either chief.