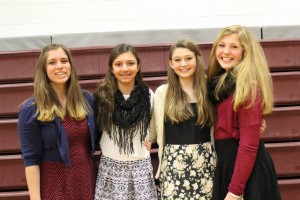 In the Slalom Race on Sunday at Hunt Hollow, Alex Sutherland came in 27th place, Lauren Beckingham came in 51st, and Alexis Hollister came in 63rd.

Though Alex DiOrio had a great first run, she did not finish (DNF) the second run.