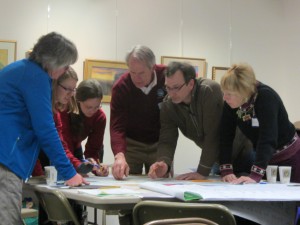 Assisting with the workshop arrangements locally was CAP-21.

The purpose was to share knowledge and generate ideas about connecting the Adirondack Park recreationally.

The belief is that land resources in the Adirondacks have greater potential for outdoor recreation, that will in turn attract more people and build up local economies.

“There is a lot of snowmobile access, but in terms of foot trail, I’ve estimated for every mile of foot trail, we’ve got seven square miles of forest preserve.” said Colin Beier, Associate Professor of Ecology in the Department of Forest and Natural Resources Management at ESF.

“We can do a lot better at accessing some of these lands.”

ACTLS is working to assemble state and private lands, public and private trails, and lodgings and related amenities, to allow for self-powered recreational uses.

GSW is working primarily on state and easement lands, state land facilities and infrastructure, and a broad spectrum of recreational uses, both motorized and non-motorized.

“The GSW is a concept that is trying to bring more individuals to this part of the Park and to really take advantage of all those great environmental assets that we have,” said CAP-21 Executive Director Nick Rose.

“The idea is to make better connections to the communities and promote a variety of different ways to get from one community to another—whether is hiking, biking or paddling,” he said.

“[GSW] is trying to digitize all of the resources…and get public suggestions for recreation in the Park that should be promoted,” Rose said.

Andrea Parker, an ESF team member, explained to participants their two exercises for the workshop.

They involved maps of Region D (Old Forge, Inlet and surrounding areas) that had been laid out at each work stations.

In exercise one, all were instructed to add current destinations and assets that are important to the area, but not recorded on the maps.

“Everyone’s input is important to us,” Parker told the participants.

A group consisting of Town of Webb Publicity Director Mike Farmer, VIEW Executive Director Jennifer Potter Hayes, and Nick Rose identified some major attractions that were not identified on the maps.

Among them were Fern Park in Inlet, The TOBIE Trail, Ferd’s Bog, and Lock and Dam Trails  in Old Forge.

Rose said the Moose River Plains serve as a rich outdoor resource for the area, and suggested that horseback riding trails might be a valued addition.

“You would need access to water and a place to park the trailers,” he said.

Hayes suggested that outdoor ice skating trail might be worth considering for additonal recreation.

“From First Lake to Fourth Lake—it could work, it’s such a natural,” she said.

“How great would it be to have a skating trail along the Fulton Chain or on some of the ponds like they have in Lake Placid,” Rose said.

Hayes mentioned that the local area has been attracting strong skating interest, as evidenced by the successful Pond Hockey event on Fourth Lake.

“That brings in a huge number of people; and we really aren’t promoting youth hockey in our area as we could,” Rose added.

There also was mention of retro use of Old Forge’s Maple Ridge, in the form of a toboggan run.

In exercise two, all were instructed to imagine recreational opportunities, popular destinations and attractions, that might utilize the Adirondack Park without detracting from its wilderness character.

Hayes echoed that the Moose River Plains is a great attraction and has the potential to become  more well known.

“It’s only known by avid hikers and bikers…It’s really beautiful back there,” she said.

“There are a number of things that wouldn’t take that much effort if they could be coordinated more between some of the communities,” Nick Rose said.

All the information and ideas from this particular workshop will be recorded and examined, and the recreational maps updated.

The next workshop will be held on Monday, March 2, from 6-8pm at the Long Lake Central School. All are welcome to attend.