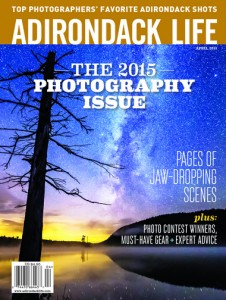 VIEW, the arts center in Old Forge, has partnered with Adirondack Life magazine for a unique exhibition that highlights the works of the Adirondacks’ most influential photographers as featured in the publication’s March/April issue.

The exhibition also features a series of four images from the Adirondack Museum’s vast photo archives that appear in conjunction with an article in the same issue of the magazine, titled A Sense of Places.

In addition to the photographs, Nathan Farb debuts a, 38-minute meditative video piece titled Vision Quest, that reimagines his large format pictures through ultra high-definition scenes that pinpoint a detail, soar up a slope, segue from water to sky and depict a dynamic yet serene observation of Adirondack wilderness.

This marks the first public showing of the work.

Pastels and Photographs, an exhibit by Paula Ann Ford and David Patterson, and Fragile Handle with Care, an exhibit by Abraham Ferraro are also on display.