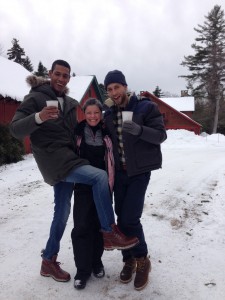 Kurt and Ximena Gardner of Adirondack Mountain Productions have been on-site in Raquette Lake this week working with a New York City-based producer in creating website imagery for the outdoor retailer, Timberland.

The Gardners and their services were discovered purely out of research by freelance producer Scott Boucher who was contracted by Timberland to produce a winter 2015 web presence geared towards wholesale buyers and suppliers. 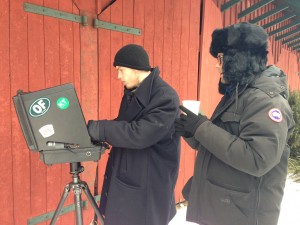 Boucher said he was drawn to the Adirondacks as a site for the shot due to the positive experience he had during a previous fall/winter shoot in the Lake Placid area.

“I fell in love with the Adirondacks when I was in Lake Placid…it’s one of the reasons why this area was appealing for me to investigate,” Boucher said. 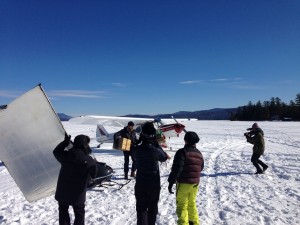 He said he looked into shooting at other locations across the country, including Mount Baker in Seattle and Sun Valley, ID, before selecting this part of the Adirondacks.

“I really liked their (the Gardners) website and after talking with Kurt, I knew they were the ones to help us with the shoot,” Boucher said.

In early January Kurt and Ximena scouted various locations for Boucher and his crew to shoot, and ultimately selected Raquette Lake and Great Camp Sagamore as the most suitable for their needs.

Boucher and a crew of 22 arrived at Water’s Edge Inn on Tuesday, January 27 in anticipation of the three-day shoot that commenced the next day.

“So far the Adirondacks have welcomed us and made it very, very easy to shoot here and do what we need to do. We’re  hoping to get everything done that we need to do and have a good time doing it, that’s the most important thing,” he said.

Among the crew filming exclusively outdoors are three models and Dylan the dog, a husky/border collie mix that Boucher says is a celebrity in his own right, having been featured on the pages of Vogue and having his own instagram account.

Well into its second day of filming, Ximena reported that the shoot has been flawless with perfect weather conditions.

As is always the case with Adirondack Mountain Produc-tions, a number of local individuals, businesses and services have been involved with the production process.

Among them is Scott Liddle who is assisting as a cameraman, and Jim Payne of Payne’s Air Service and a helicopter operated by North Country HeliFlite of Glens Falls came in to assist with some of the stunt shots.

Kathy and Paul Rivet of Five Corners Café have opened their restaurant for evening meals.

Filming is expected to wrap up on Friday, January 30, but Ximena said this will most likely not be the last time the NYC production crew visits our part of the Adirondacks.

“The crew is so impressed with the area and the welcoming nature of the people that they are talking about coming back for another shoot…or as tourists. Hooray for Old Forge and Raquette Lake!” she said.