Ninety-seven books were donated to the Town of Webb school’s library and select classrooms by the family and friends of Elaine Williams, mother of Adrienne Williams, to honor Adrienne’s life. 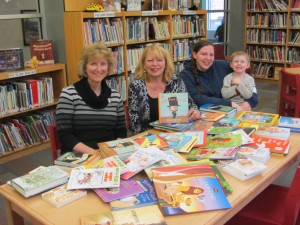 Kirsten Down, Elaine Williams, and Angela Denslow and her son Brody. Photo by Gina Greco

Adrienne was a student at the Town of Webb school before her life was taken in a tragic car accident in the fall of 2003.

Elaine wanted to do something extra special for her daughter’s 30th birthday and to pay tribute on the anniversary of her passing.

“When she was little, she was a reader,” said Elaine.

“I always used to tell Adrienne that knowledge is power. If you get a college degree, no one can take that away from you,” she said.

The goal was to inspire thirty book donations, but they tripled their goal, she said.

Some of the donations came from as far as California, according to Elaine.

Certain books had been requested by school faculty members. All those requests ended up being fulfilled, she said.

School Librarian Kirsten Down said that among the offerings are books about Helen Keller, Albert Einstein, Dr. Seuss, Walt Disney and Abraham Lincoln. Individual titles vary by topic and age range, she said.

“The library is very grateful and deeply moved by the donations,” Kirsten said.

“I’d like to especially thank my family and friends, the staff at the school, and Bob Denoyes for making this possible,” Elaine said.

“My children have all graduated from the Town of Webb school, but I still hold a place in my heart for it and the community we live in,” she said.

“We had a lot of support from the community at the time of our loss. I probably wouldn’t be a functioning adult today if it weren’t for them.”