Two guys walk into a bar. While eating lunch, one notices that the establishment is for sale. He converses with the owner and is intrigued with the building’s history.

During their talk he discovers the owner is a distant relative of his wife’s, so he calls her to join them. In the meantime the owner’s daughter and son stop by and they have a mini family reunion.

Three days later the man and his wife make a handshake deal to buy the business.

But that’s not the end of the tale…rather it’s the beginning of the story for Jim and Suzan Moore, a retired couple from Kentucky who just seven weeks ago made the deal with owner Joan Marks to purchase Thendara’s Van Auken’s Inne. 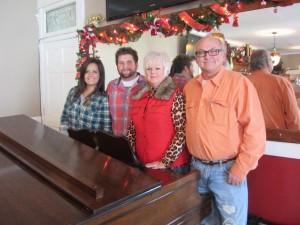 Jim, a native of Kentucky, said the purchase is a homecoming for his wife.

“Suzan grew up in Marcy and always felt it was home,” he said

She met Jim in the early 1980’s when she was waitressing at the Utica-area nightspot S-Kickers and he, a guitarist, was performing with the southern-based Mike Miller Band./

They married in 1982 and moved to Jim’s native state where they raised two sons.

But the family continued to make frequent trips to the Mohawk Valley, and consequently to Old Forge, where the boys learned to ski at  McCauley Mountain.

After vacationing on Fourth Lake this summer, they were quite taken by the area, Jim said. Their late-fall visit to Old Forge made them realize that this was where they wanted to be.

Feeling a similar connection, son Andrew and his wife Tara made the move from Florida to act as general managers of the inne/restaurant.

As owners, Jim said patrons can expect few changes other than the absence of Joan, Mary and Michael Marks, proprietors since 2007.

“Some big holes were left behind following the departure of the Marks family. They certainly had day-to-day active roles in the business. But the rest of the staff remains—along with some new additions—and we have promoted from within,” he said

Among them is Vicky Beck, whose new title is Operations and Special Events Manager, and Becky Gaither who has been elevated to the role of Master Chef/Kitchen Manager.

“These two people give us the assurance that all the good things about Van Auken’s will continue. They have been instrumental during this transition,” Jim said.

Ultimately the Moore family’s goal is to pay homage to Van Aukens’ rich history and to those who acted as its stewards for the past 123 years.

In a nod to the days when hundreds of skiers took the train to adjacent Thendara Station, the Moores will offer Ski & Stay and Ski & Ride packages to their guests, complete with shuttle service—a service that will also be available to patrons year-round, to and from local destinations, as well as to the airport and train station.

McCauley Mountain day ski passes will be available to guests, and 10 snowmobiles have been purchased as rentals.

Because they are a musical family—Jim continues to play guitar, while Andrew is adept on piano and guitar—live music will be performed regularly.

Among the performers that will be become familiar are Andrew, who will perform at DrewsKeys Piano Bar a couple nights a week, karaoke with Mike Notley, and acoustic music by Alisha Kay Carstens—all geared toward an earlier crowd.

“Our concept is to not be in conflict with existing establishments. We see this as an early live music venue…have your dinner and sit, have a cocktail and listen to some quiet music. People have been dancing right in front of the piano; we like that,” Jim said.

The summer Thursday “Music on the Porch” performances will continue, and a Sunday afternoon “Blues and BBQ” series is in the planning stages.

But the biggest and most exciting addition will be the revival and restoration of the basement speakeasy, a space that Jim said appears to have remained dormant, and not used for anything but storage, since the 1930s.

“In every true sense of the word, it was a genuine speakeasy. It’s got all-wooden doors, tin ceilings, and all the wood is intact,” he said.

For the past few weeks the owners and staff have been hauling out stuff for a complete renovation that will be on-going throughout the winter and spring.

They are targeting a late-spring 2015 opening.

In the meantime they are pulling together stories from grandchildren of folks who frequented the speakeasy back in the day.

“We’re trying to gather more history and want to rebuild it and keep it as it was…a hidden treasure. There won’t be any signage, we will create mystery through our website,” Andrew said.

The Moores are grateful to the community that has welcomed them so warmly, and have made it a point to hire local contractors and deal with area businesses whenever possible.

New lighting was installed by Meyda Tiffany, and bar decor was found at Wilderness Interiors.

The new piano bar is being built by Jim Kiefer of Shelter, and sleds were purchased from Big Moose Yamaha and Smith Marine.

They have also purchased an additional sled, a 2015 Yamaha Viper, that will be raffled off during the March 2015 Snowfest event.

Patrons can sign up from noon to 5 p.m. on Sundays for an opportunity to win it.

The sled is now on display on the porch of the inne, a placement that incorporated the help of neighboring business Morin’s Collision, and Jon Martin, co-owner of Big Moose Yamaha/Arctic Cat.

All-in-all, the Moores look forward to making their mark in Van Aukens’ history.

“It’s interesting, the legacy. Each owner has added a piece of the puzzle. It’s obvious that the Markses did a lot of work here, and they have helped us a lot. We’re just another step of the evolution…123 years. When the Inne is 200 years old, someone else will be having this conversation,” Jim said.

The Moores will make their big debut over Snodeo Weekend, that will be held Friday through Sunday, December 12 to 14.

Festivities are planned throughout the weekend, including Saturday night’s Official Yamaha Party that begins at 6 p.m.

There will be plenty of live music, Yamaha giveaways, and a buffet. All are welcome to attend.